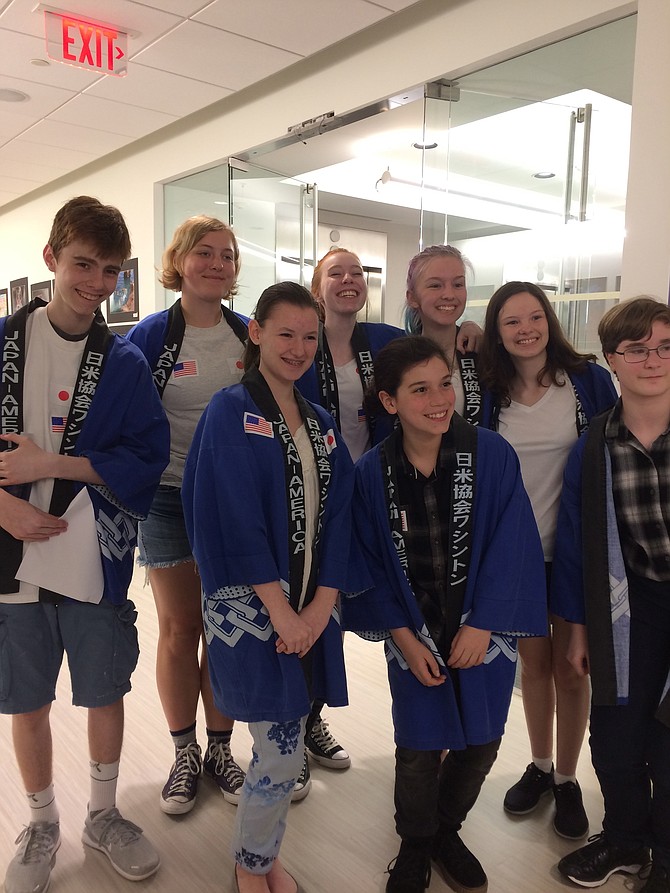 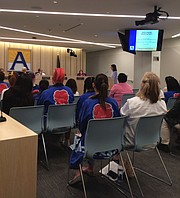 Elisabeth Harrington addresses the school board providing statistics on the success of the FLES program, the immersion program, AP and IB programs, the Seal of Biliteracy, and Credit by Exam program.

The School Board members were enthralled on the evening of May 3 as they sat in their new boardroom at the Syphax building, listening to students reel off the reasons why Japanese and German should be in the program of studies.

After a presentation by World Language Program Supervisor Elisabeth Harrington, detailing the data on how well the Arlington Public Schools language program is doing, public comment included students who, one by one, came to the podium and passionately, patiently, politely, and often emotionally, explained why Japanese and German were important to their education and their lives.

Liam Mason questioned the logic: Because demand for the two languages had dropped, the languages would no longer be offered. “It didn’t make sense,” Mason said, “the number of students taking Japanese Level 1 has actually increased with 34 students the year before and 45 in the current year.” Mason also noted that collecting signatures on a petition to maintain Japanese had been easy: within eight days, 1,300 Arlington residents signed. Japanese language was something the school system itself touted as a success, gaining accolades for APS, with two students of Japanese at H-B and Wakefield being awarded the Summer Residential Governor’s School for their language: why then cut something of which they were proud?

Katie Morgans, a 2003 APS grad who took Japanese in the last two years of high school, said it had changed her life. She had gained a passion. The APS language program was one of the reasons she was drawn back to teach at Claremont Immersion school and the commitment of the school system to world languages remained an important part of the reason she taught here.

Cordelia Medrick made a plea to keep German classes and to offer them in middle school so they could be given the same recognition that other languages are given. “Knowing German,” she said, “gave her access to three leading European countries. There are 76 million native German speakers and two million non-native speakers.”

Mary Bennet said that the decision not to continue Japanese might make sense from a businessman’s perspective — with supply and demand being key — but from an educational perspective, language learning was important — language class was a place to meet new people, share a laugh, become part of a community. “There’s beauty in every language,” she said.

And since she had just taken the first half of her philosophy exam, she noted that in discussing the “Good,” it was clear to her that “language is the Good, and language learners are the Good, and the people sitting in this room tonight trying to change the minds of the School Board — also Good.”

Alison Lee, after a bilingual greeting, said she had moved here from Yokohama in 2009. The class in Japanese taught her to love the language more than even living in Japan had. “As it is,” she said, “this county is extremely Eurocentric. The only other Asian language offered in the schools is Chinese, and China really doesn’t represent all of Asia.” She also noted that the friends she made in her language class showed a stronger bond than any other at Yorktown High School.

The School Board appeared supportive: they did not understand why Japanese and German had been taken off the program of studies since demand existed and there was no clear budget advantage. Across the board, members expressed support for foreign languages. Barbara Kanninen went a step further: “I am struck by the passion in this room tonight for pursuing a language that is not the most popular but these kids clearly love. And frankly that’s what we do. It’s our job to help kids find a passion and if it’s not in our mission statement we’re thinking about putting it in our mission statement. And I might add, I don’t know if everyone agrees with me, but this is the most effective advocacy campaign I have ever seen in my time here.”