‘A Brotherhood Of Survivors’: WWII veteran recalls rescue at sea. 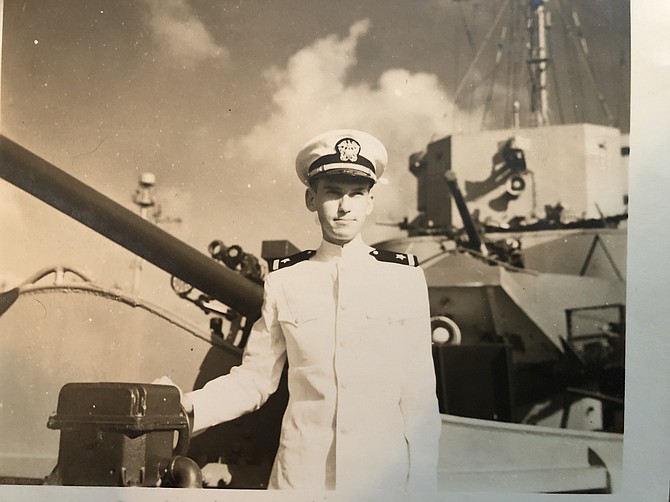 Philip Lundeberg aboard the U.S.S. Frederick C. Davis, just weeks before it was hit by a German torpedo and sunk in the North Atlantic during World War II. Lundeberg was one of just 27 survivors. Photo contributed 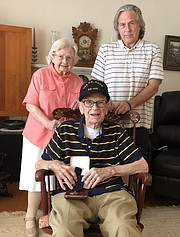 Philip Lundeberg with his wife Eleanore and son Karl at his home in the Waynewood section of Alexandria. Lundeberg will receive the Distinguished Patriot Award from the Alexandria Chamber of Commerce on Nov. 8.

“There is a brotherhood among survivors at sea. Friend, foe or rescuers, it becomes a close fraternity.” —Philip Lundeberg, WWII veteran and survivor of the Frederick C. Davis.

Shivering in the frigid waters of the North Atlantic, Philip Lundeberg struggled for hours amid the ocean swells as the U.S.S. Frederick C. Davis slipped quickly into the murky waters below. It was April 24, 1945, and the Davis had just been torpedoed by a German U-boat, becoming the last warship sunk in the Battle of the Atlantic.

“The torpedo’s sudden impact was quite a shock,” Lundeberg said from his home in Alexandria. “There were desperate efforts to find some direction in a darkened ship and then the surreal experience of simply walking into the water from a deck already submerged.”

Lundeberg was just 22 years old at the time, a Navy Ensign and the youngest of only three surviving officers aboard the Davis when it was hit less than a week before the end of fighting in Europe during World War II.

The Frederick C. Davis had been deployed to the western Atlantic in early 1945. The ship served as a coastal convoy escort and anti-submarine patrol and in mid-April joined a special surface barrier force formed to protect the Atlantic coast from the threat of German submarines during Operation Teardrop. It was one of these, U-546, that hit the Frederick C. Davis on the forward port side.

Within minutes, the ship broke in two and efforts to preserve the buoyancy of the stern, where the damage was less and the majority of survivors were located, failed. Her survivors — only 27 out of a crew of 192 — abandoned the ship, with a loss of 115 men.

“I think I was in shock,” Lundeberg said of the hours it took for survivors to be rescued. “We did our best to murmur words of encouragement to each other but we could still feel the rumbling of depth charges below us.”

The U-546 was sunk by combined fire of five other U.S. destroyers. Her captain, Paul Just, and most of her crew were rescued by American vessels and taken for interrogation to Argentia Naval Station.

“We had no inkling for years of the ordeal Capt. Just and his men would endure at Argentia,” Lundeberg said. “We were dimly envious of the crew of U-546 as they were spirited off to Newfoundland.”

Lundeberg would go on to spend more than 40 years in military service, completing his doctorate at Harvard University and teaching at the U.S. Naval Academy before being hired by the Smithsonian Institution in 1959. He rose to the position of curator in the National Museum of American History and over the years organized reunions of the survivors of the Frederick C. Davis, U-546 and the rescue boats involved.

“There is a shared history of survivors of Frederick C. Davis and U-546 that has continued even after the passing of many participants,” said Lundeberg, who noted that he became particularly close with the captain of the submarine that sunk the Davis.

“As a Naval historian, I got to know Capt. Just well,” Lundeberg said. “He brought chunks of the Berlin Wall to one of our reunions to express his gratitude for what we did after the war.”

One such reunion occurred over Memorial Day weekend in 1990. The Davis survivors joined with men from the U.S.S. Hayter, Flaherty and Varian recuse ships, together with 11 survivors of U-546.

“There were many memorable insights shared during these deeply private conversations,” said Lundeberg, who added that all of the German survivors are now deceased.

Lundeberg, now 95 years old, lives with his wife of 65 years, Eleanore, in the Waynewood section of Alexandria. He said that he is unsure of how many Davis survivors are still alive.

“Perhaps there are only two or three of us left,” said Lundeberg, who said his friendship with the German U-546 captain was not unusual. “There is a brotherhood among survivors at sea. Friend, foe or rescuers, it becomes a close fraternity.”

Lundeberg will be presented with the Distinguished Patriot Award by the Alexandria Chamber of Commerce at the Nov. 8 Salute to Veterans ceremony at the Carlyle Club in Old Town. For more information, visit www.alexchamber.com.