Last survivor of the Frederick C. Davis dies at 96. 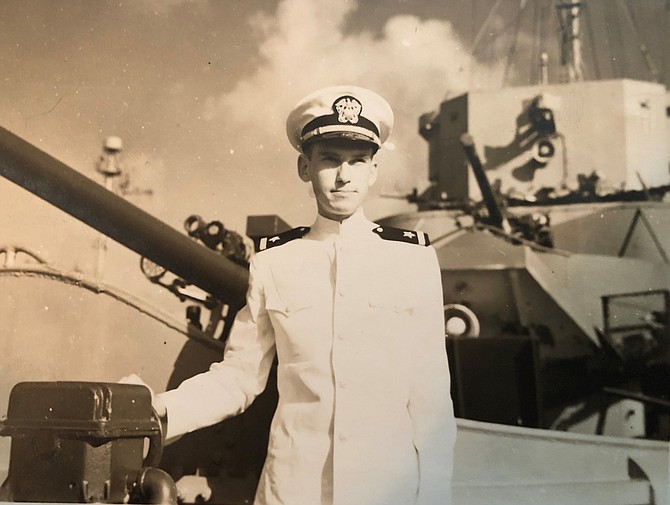 Philip Lundeberg aboard the USS Frederick C. Davis just weeks before it was hit by a German torpedo and sunk in the North Atlantic during World War II. Lundeberg was one of just 27 survivors. Photo contributed 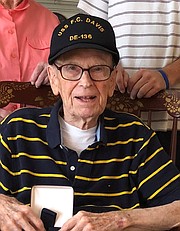 World War II veteran Philip K. Lundeberg, a survivor of the sinking of the USS Frederick C. Davis, died Oct. 3 at the age of 96.

Philip Lundeberg and survivors of the USS Frederick C. Davis warship struggle in the icy waters of the North Atlantic in April of 1945.

Shivering in the frigid waters of the North Atlantic, Philip Lundeberg struggled for hours amid the ocean swells as the USS Frederick C. Davis slipped quickly into the murky waters below. It was April 24, 1945, and the Davis had just been torpedoed by a German U-boat, becoming the last warship sunk in the Battle of the Atlantic.

Lundeberg was just 22 years old at the time, a Navy Ensign and the youngest of only three surviving officers aboard the Davis when it was hit less than a week before the end of fighting in Europe during World War II. On Oct. 3, the decorated veteran and last remaining survivor of the Davis died at his home in the Waynewood section of Alexandria. He was 96.

The Frederick C. Davis had been deployed to the western Atlantic in early 1945. The ship served as a coastal convoy escort and anti-submarine patrol and in mid-April joined a special surface barrier force formed to protect the Atlantic coast from the threat of German submarines during Operation Teardrop. It was one of these, U-546, that hit the Frederick C. Davis on the forward port side.

Within minutes, the ship broke in two and efforts to preserve the buoyancy of the stern, where the damage was less and the majority of survivors were located, failed. Her survivors – only 27 out of a crew of 192 -- abandoned the ship, with a loss of 115 men.

“I think I was in shock,” Lundeberg recalled prior to being presented with the Alexandria Chamber of Commerce 2018 Salute to Veterans Distinguished Patriot Award. “We did our best to murmur words of encouragement to each other but we could still feel the rumbling of depth charges below us.”

Born June 14, 1923, Lundeberg would go on to spend more than 40 years in military service, completing his doctorate at Harvard University in 1954 and teaching at the U.S. Naval Academy before being hired by the Smithsonian Institution in 1959. He rose to the position of curator in the National Museum of American History and over the years organized reunions of the survivors of the Frederick C. Davis, U-546 and the rescue boats involved.

“There is a shared history of survivors of Frederick C. Davis and U-546 that has continued even after the passing of many participants,” Lundeberg said prior to last year’s Veterans Day tribute. “There is a brotherhood among survivors at sea. Friend, foe or rescuers, it becomes a close fraternity.”

Lundeberg was a recipient of the Bronze Star, the Purple Heart and several campaign medals. Additionally, he received the Commodore Dudley W. Knox Naval History Lifetime Achievement Award in 2013, established by the Naval Historical Foundation to honor the memory of the naval historian Commodore Dudley Knox, and to recognize the lifetime achievements of historians of the United States Navy.

Lundeberg's scholarly writings, his involvement in national and international military history organizations, and his contributions to maritime history established him as one of the foremost historians of his generation.

Lundeberg is survived by his wife of 66 years, Eleanore, son Karl Lundeberg, sister Andrea Lundeberg Ross, and two granddaughters, Marika Julia Lundeberg and Annika Kjersti. A memorial service will be held on Thursday, Oct. 10 at 11 a.m. at St. Luke Lutheran Church, 9100 Colesville Road, Silver Spring, Md., 20910. A reception at the church will follow.