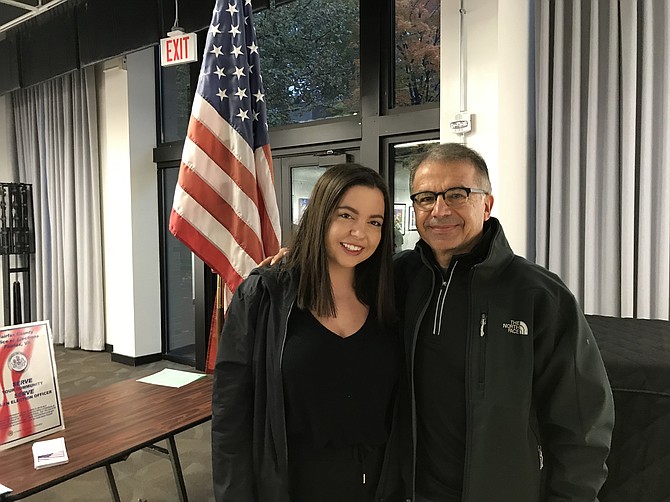 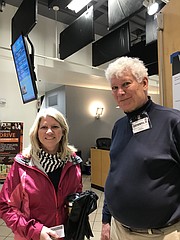 Election officer David Okerson greets voter Lorrie-Ann Melnick as she enters the polls at Lake Anne Community Center in Reston. “I always vote the primary, midterm and Presidential elections. I'm out to make a change from the 2016 elections,” said Melnick. Added Okerson: ‘This is my second year as an officer. It was enjoyable the first year. The enthusiastic multitude of voters was very impressive.’ 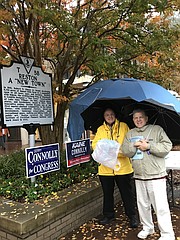 Dale Johnson and Bill Berkson distribute the Commonwealth of Virginia Democratic Sample Ballot to voters heading into the Reston Community Center Lake Anne to cast their ballots during the Tuesday, Nov. 6, 2018 election. 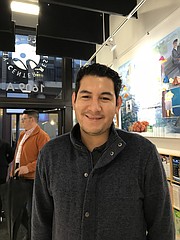 Jose Garcia, Reston: ‘I just moved to the district. …I want to be involved in local issues. I did some research ahead of time, and I did online searches on the candidates. I received the County information in the mail.’

The Connection headed to one of the Reston polls early on the morning of the Nov. 6, 2018 Midterm Election featuring state candidates for the United States Senate and Member of the House of Representatives 11th District. With an apparent strong early turnout at the Reston Community Center polling station, the Connection spoke with voters, Fairfax County Officers of Election and party representatives to gain their insights on why they were there that day and any other comments they'd like to share.

At the time The Connection visited the polling station only representatives for the Democratic Ballot were outside the site and available for comment. One of the many comments received from voters came from Hannah Wells, who although she did not wish to be photographed, said “I’d like to see some positive change following the 2016 election.”