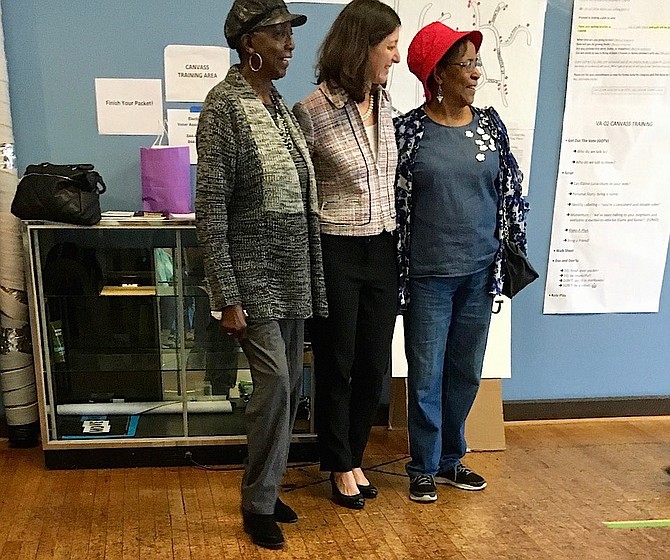 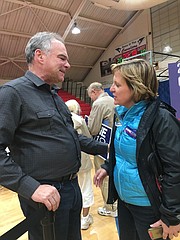 Arlingtonian Laura Hagg with U.S. Sen. Tim Kaine as she talked about the role VIrginia has in setting an example for young democracies in North Africa, where she just spent a year encouraging grassroots democracy. 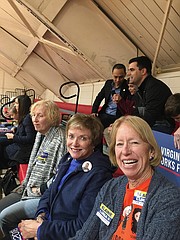 Sheridan Collins of Arlington sits next to Bett Cake, who wears a picture of her husband on her lapel. His signature was forged on a petition to add a third party candidate to the race in the Second DIstrict — two months after he died. 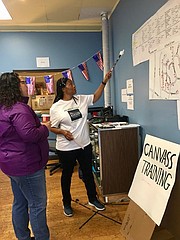 Elaine Luria’s campaign featured Juanita Williams, who explained how to canvass and get out the vote to hundreds of volunteers from Northern Virginia and Washington, D.C.

Details on then and now voting in “flippable” congressional districts where local activists spent time this summer and fall:

As election eve approached, “We of Action Virginia” and “Virginia Democracy Forward” activists who had spent many hours travelling to other districts to knock on doors, who had spent hours writing postcards, phone banking, and getting voters to register, began to wonder if they were being too optimistic.

In September and October they believed they could flip four seats in Virginia's congressional districts; was that too much to ask? What would success look like? Maybe two seats being flipped would be all they could realistically expect. In the end, three seats — in the 2nd, the 10th, and the 7th — flipped. Even Leslie Cockburn and Vanessa WIlliams did relatively well given their “red” districts.

Local activists were also happy with the statistics: comparing 2014 and 2016, Virginia was trending blue. Despite the celebratory atmosphere on Nov. 6 at the Courthaus Social, the group was already thinking about next year’s General Assembly elections and the effort to ratify the ERA (Equal Rights Amendment.) To learn more about ways to get involved, see: www.WofaVA.org and www.VADF.org.