The town’s Turkey Trot has been going on for 16 years. 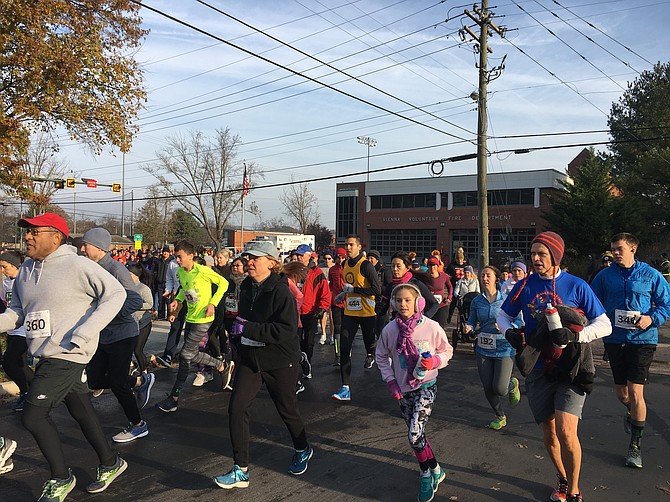 The Fire Department’s parking lot served as the location of the “Finish Line Festival” which included refreshments and offerings from local sponsors.

James Madison High School’s Jazz band provided a bright atmosphere for the start and finish of the Trot.

On a brisk November Sunday morning, neighborhood roads were blocked off and the jubilant echoes of James Madison High School’s Jazz Band could be heard radiating from Vienna’s Volunteer Fire Department.

The town’s Turkey Trot has been going on for 16 years, and throngs of local participants were clamoring in and around the Fire Department before the start of its latest installment.

“This year the biggest challenge has been the weather,” said a first-time co-director of the race Helena Klumpp. “We’ve had so many bad weather weekends that local races have had to be postponed and cancelled.”.

According to Klumpp though, registration spiked once the race day forecast came out.

“Once we got into that ten-day window, our registration started to take off and we were getting between 50 and 100 a day”.

As of early Sunday morning 1,220 trotters had registered for the Kids Fun Run, 5k, or 10k versions of the USA Track and Field certified course, with many more registering on-site to join the fun.

“I’m actually the head coach of the Orangetheory Fitness that opened up,” said 5k participant Taro McCreary, “so it was a really nice community event to be a part of.”

Though Taro was one of the faster competitors, his participation is an ode to the positive synergy generated by the event. Benefiting the Volunteer Fire Department and Madison’s Band, members of both organizations came together to put on the highly popular affair. In addition to the main events, the parking lot and interior of the Fire Department served as a home base for race sponsors and spectators. While band members directed racers and handed out refreshments, local businesses were able to promote their services directly to the community.

“I’m in the band at Madison,” said senior Reese Noyes, “so we volunteer every year and this is my fourth”.

In addition to the weeks of preparation preceding the Turkey Trot, Noyes and other volunteers had to arrive at 6:45 in order to have the event up and running before its 8 a.m. start time.

“Well,” said Ken Maloney, the father of an Oakton High student and racer, “I’m glad he’s out getting regular exercise and got involved in activity that’s really good for him.”