Cappies Review: ‘A Spare Me’ in Mount Vernon
Votes

Cappies Review: ‘A Spare Me’ in Mount Vernon 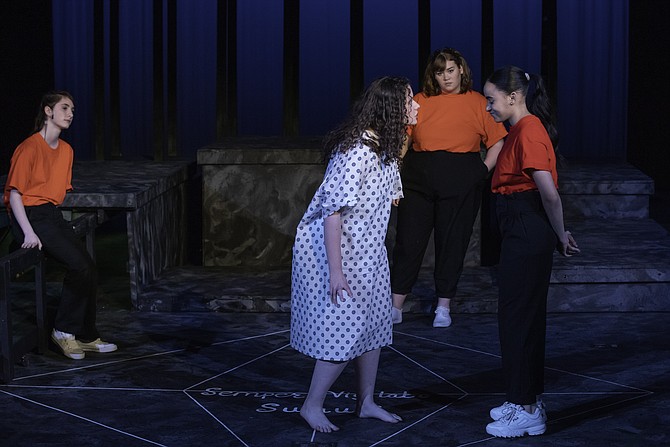 What makes us us? Is it our body, brain, memories, soul? Mount Vernon High School's thought-provoking performance of "A Spare Me" explores identity and how society views others.

"A Spare Me," written by A. Rey Pamatmat, takes place in a dystopian society, where the fate of humanity rests on society's current teenagers. Because of this fragile state, the children receive clones, who are referred to as spares, to replace them when they die. While the spares are given the "primary's" memory, they are not the same person. The spares question their identities, as they feel that they are made up of two different people and are pressured to be the deceased by friends and family.

The entire cast transported the audience to a dystopian, futuristic society through their synchronization, unwavering characterization, and clear diction. The student ensemble was always in character, playing games such as rock paper scissors, talking to one another, or fighting each other in the common room.

The creative set, lighting, costumes and sound created a futuristic image. The set, which Tania Romero Gonzalez led, consisted of multipurpose marble green platforms, a trapped door, and a black balcony. On the floor of the stage written in Latin read, "We are always watching," emphasizing the dystopian aspect of the play. The backdrop of the stage was lit by electric blues and greens. During the Epilogue the set, lighting (done by Micco Aniano Daniels), and costumes (created by Laura Schmechel) painted a stunning image. The spares were dressed in polka-dotted hospital gowns and were leaning against the rods holding up the balcony, while the backdrop was an eerie, and an electric, green. The futuristic music (done by Tanner Buggein) in between scenes also emphasized the dystopian setting and was occasionally accompanied by the rumble of a car, an impressive addition. The stage crew also admirably made transitions quickly.

Monica Caceres's make-up and hairstyles added nice details to the characters. Tee's convincing bruise and black eye after a fight were especially laudable.

Isabel Pascal's portrayal of Elga was also notable. Her stage presence, diction, and characterization were unwavering, and who could forget her impressive recounts of several random numbers.

Mount Vernon's laudable production of "A Spare Me" asked the audience to question how they treat others in society and their own identities.