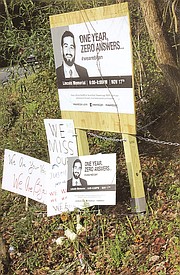 Signs bear witness to the one-year anniversary of the shooting of Bijan Ghaisar at Alexandria Avenue and Fort Hunt Road.

On Nov. 16, a day before the anniversary of the U.S. Park Police shooting of Bijan Ghaisar, an unarmed, 25-year-old man who died days later from his wounds, U.S. Rep. Don Beyer (D-8) issued the following statement:

“One year after the shooting of Bijan Ghaisar, we are no closer to understanding why he had to die. The complete lack of transparency by federal authorities continues to hurt Bijan’s loved ones and undermine trust in the community. There is no excuse for taking this long to release the most basic information about a police-involved shooting.

“I will continue to press for details, and to push for legislative solutions to prevent this from happening again, but it should not be this hard to establish basic facts of what occurred here.”

The shooting of Bijan Ghaisar by U.S. Park Police occurred on the evening of Nov. 17, 2017, in the Fairfax County portion of Beyer’s congressional district.