Leading by Example in Great Falls

Boy inspires others to be kind and socially conscious. 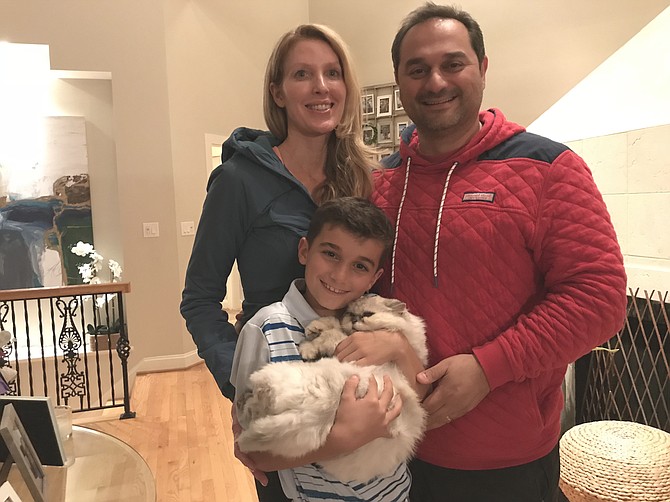 Meredith and Shaw Mostashari of Great Falls are proud of their son Hudson, 10, a young philanthropist in his own right. Hudson decided he would forfeit birthday gifts and instead ask his friends and family to make donations for the purchase of food and supplies for the homeless living on the streets in Washington, D.C. Photo by Mercia Hobson.

A certain young boy didn't know the word "philanthropy" during a recent interview with the Connection, but he knew the importance of caring, generosity and accomplishing things through his actions.

Hudson Mostashari of Great Falls recently celebrated his tenth birthday. He asked for no gifts. Mostashari did invite eight friends to celebrate the day with him, but instead of giving him gifts, he asked if they'd make a monetary gift contribution to buy food for the homeless in Washington, D.C.

Although Mostashari's friends were somewhat shocked at the request, they all went along with it. His mother, Meredith Mostashari, arranged for the anticipated funds to be donated directly to the Barbera Foundation in Reston.

Hudson Mostashari raised approximately $200 through his no gifts for me, food for the homeless birthday campaign, said his mother.

"It is very impressive that Hudson, a 10-year-old, thought about others on his birthday, a day when most of us think about ourselves," said Kevin Barbera, Barbera Foundation, CEO & Founder. "Hudson has inspired me and many others to be more engaged in charitable efforts to change our community for the better."

Mostashari hinted he got the beginnings of the no gift birthday when he and his parents helped fellow volunteers for the Barbera Foundation sort school supplies for underprivileged children this fall. His actions made a difference, and it made him happy, too.

Mostashari told how he also attends the Leadership Training Program led by Fr Andrew Gronotte, LC. Mostashari said he and his family planned to join Gronotte and Fr Michael Sliney at the Thanksgiving/Christ the King Family Mission in Washington, D.C. to help support the homeless. Together they would hand out pizza to the homeless living on Pennsylvania Avenue. Asked in the interview if he would have a slice of pizza, Mostashari looked surprised and said no. That would mean a homeless person wouldn't get it and that person would be hungry.

“Hudson is doing a great job living out the virtues that we are trained to teach him in the LTP program. Not only are his actions effective to those he directly comes in contact with but also with the people looking in from the outside,” wrote Fr Andrew Gronotte in an email to the Connection.

“I am very impressed with Hudson’s actions,” Gronotte added. “I hope many others can follow the path that he is paving."