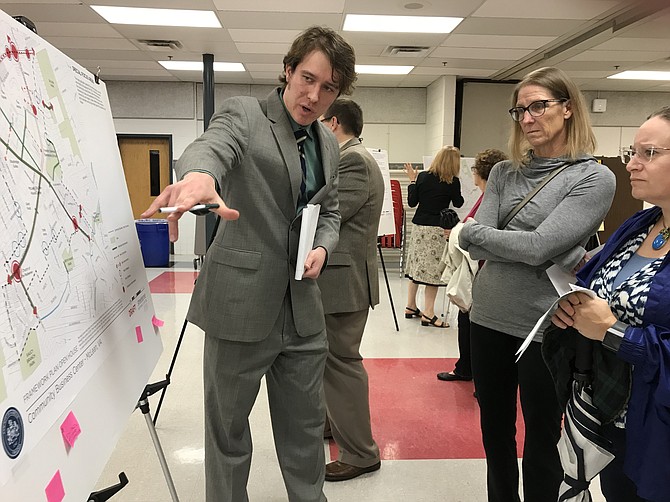 "Some ideas may be possible and doable; some may not," says Zachary Krohmal, Fairfax County Department of Transportation, to McLean residents Carol Dinion and Erin Thiebert. Photo by Mercia Hobson. 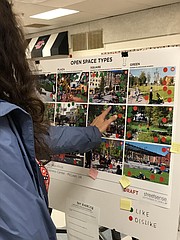 Participants affix green and red dots to photos of different types of open space to indicate by green their three favorite designs and by red their least favorite designs they would be likely to use in the CBC.

Dranesville District Supervisor John W. Foust talks with a McLean resident at the first of two open houses where the community had the opportunity to view a draft vision plan.

Frank and Linda Cevasco stood at the McLean High School Cafeteria along with roughly 75 other community members and Dranesville District Supervisor John W. Foust. Earlier this summer, the Cevascos participated in three workshops by the Fairfax County Department of Planning and Zoning led by Streetsense, a Washington design and strategy firm. The county hired Streetsense as a consultant to help consider different vision goals for the future of the McLean Community Business Center (CBC).

"The last session was a workshop and we provided our views about what would make sense for the McLean Business Downtown in the next two decades," said Linda Cevasco. "We're here to see what was distilled out of it."

Streetsense presented the Framework Plan Open House for the CBC Thursday evening, Sept. 27. Before the presentation, Zachary Krohmal, Transportation Planner for Fairfax County Department of Transportation looked at the Framework Plan display panels with the public. "Some ideas may be possible and doable; some may not," Krohmal told Carol Dinion and Erin Thiebert of McLean.

DURING THE OPEN HOUSE, Colin Green, Director of Planning at Streetsense, explained to the crowd that the initial draft of the vision plan came from what Streetsense heard earlier this spring were the issues and what the community wanted.

Green added that a small hotel of 100-150 rooms could be feasible in ten years.

The existing area of the CBC, Green told could be divided into three zones beginning with the Center Zone where the most evolution and intensification would be appropriate. Green defined the current Center Zone as low-density, low-rise and auto-oriented. Community input and workshop exercises indicated a preference in the future for 5-story buildings, with mostly residential over retail and some office over retail. Units constructed close to the street with wide sidewalks encouraging public engagement while protecting pedestrians from vehicular traffic appeared most popular, as were street trees and bicycle infrastructure. Parking types preferred indicated both structured and on street. As for public spaces, while community input leaned toward green space, given the potential density, plaza and square space and streetscapes appeared more compatible, Green said. He cautioned the images on the display panels did not precisely represent what might be delivered.

According to Green, the second zone, the proposed General Zone would be composed of moderately mixed, single-use and mostly neighborhood-scale commercial buildings. They would be close to the street with sidewalks to accommodate retail and public engagement, with a mix of auto, bike and pedestrian movement and passages to get between blocks. Here there would be the possibility of larger, open public spaces.

The third area of the CBC would be the Edge Zone, essentially the residences, with very low density and access to the General and Center Zones by walking. Parking would be on the street and no commercial activity. These areas are generally in need of managed transition to adjacent zones, states the Framework Plan.

Streetsense estimated approximately 6 acres of public spaces in the CBC of varying sizes that should go somewhere in the three zones in conjunction with other development.

Pedestrian and bike improvements with access and mobility improvement played a vital part of the vision plan, according to community input provided by Streetsense.

"We heard very loudly people want to ride bikes to the Metro," said Green. Community feedback also drew attention to intersection improvements such as Old Dominion near McLean Central Park and Old Chain Bridge Road. According to a map in the Framework Plan: "The type of improvement can take a variety of form, depending on what the community decides, ranging from such thing as signalization enhancement to crosswalk upgrades to bike infrastructure addition."

During comments during the Open House, one person cautioned that the walking path going through the elementary school grounds was a concern. Another said there was a need to achieve symmetry of the streetscape and density on several streets in the CBC such as on Ingleside Avenue, Old Dominion and the south side of Route 123 to produce a lower density in the transition zones.

Joyce Harris asked, "When will we talk about the natural environment?"

AFTER THE PRESENTATION, Kimberly Briggs who bought a home two years ago on Ingleside, located on the edge of the CBC, spoke about her interests for a more comprehensive buffer to residential units, a transition to height and density. "I'm concerned … we bought two years ago. I'm disappointed. I thought my property values would be going up. Now, we could potentially have development in front of us."

Asked what concerns she had, Pat Kimm said, "Traffic and parking are the overwhelming short-term issues."

"They must be considered," warned her husband, Vic Kimm.

Streetsense is accepting suggestions for land use changes until Nov. 15, 2018. The entire process for the new Comprehensive Plan for the McLean CBC is expected to take until late 2019/early 2020 Streetsense reported.

“I really appreciate the community’s participation as we methodically step through the process of developing a Vision Plan for downtown McLean,” wrote Supervisor John W. Foust in a statement. “Community input is critically important because that vision will serve as the foundation for revising the Comprehensive Plan that will guide revitalization in downtown McLean for many years to come.”

The next community meeting is Nov. 8 at 7 p.m. at McLean High School. The consultant will present a draft version of the Vision Plan based on the input already received.

Foust encourages anyone with interest to come to this meeting. “It is important that we continue to have significant community input on what the consultant presents.”