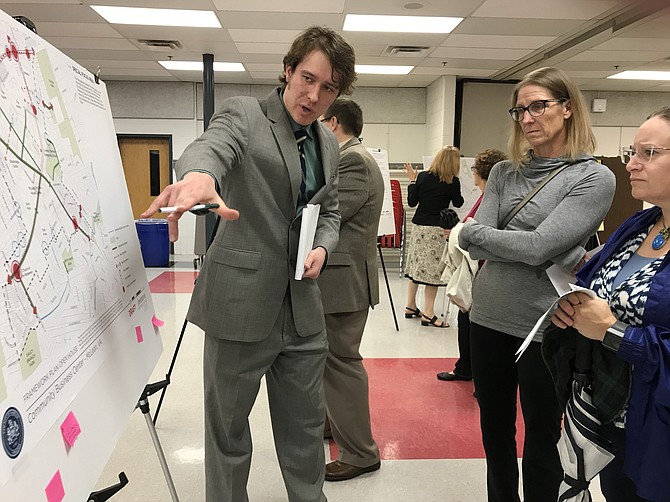 On Sept. 27, 2018, when Streetsense presented the Framework Plan Open House for the CBC, Zachary Krohmal, Transportation Planner for Fairfax County Department of Transportation, looked at the display panels with McLean residents Carol Dinion and Erin Thiebert. He said, "Some ideas may be possible and doable; some may not." (File Photo) Photo by Mercia Hobson. 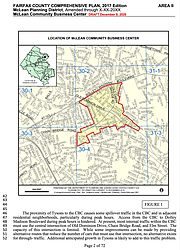 A concept design for an area along Chain Bridge Road.

Those interested can go to the Fairfax County website for the McLean Community Business Center (CBC) Study to attend the meeting using the WebEx platform. Attendees can participate virtually by laptop or desktop as well as a smart device. To receive a callback, provide your phone number when you join the event. Call 1-844-621-3956 and enter the access code:179 701 2779.

Begun in the summer of 2018, the community-driven planning study for The McLean Community Business Center started with a series of three workshops to reimagine the area. The Board of Supervisors authorized a Comprehensive Plan amendment to review approximately a 230-acre site centered around Old Dominion Drive and Chain Bridge Road.

By fall,  the County had hired Streetsense to consider different vision goals for the McLean Community Business Center. Colin Greene, senior director of planning for Streetsense, presented the Vision's second Draft. At that time, Greene said the final recommendation, even if fully adopted by the Fairfax County Board of Supervisors as an amendment to the Comprehensive Plan, remained a vision. Greene said, "No one has put in applications for redevelopment. There's no agenda." The study was meant to be a "framework for future development."

According to Foust's post: "The draft Plan retains the neighborhood serving aspect of the downtown area but identifies the center of the downtown as an area of taller mixed-use buildings that create a sense of vibrancy and support walkability. A signature urban park is expected to be a major placemaking element in the center of the CBC. Development intensities would taper away from the core area, and existing development intensities around the edge of the CBC are expected to be retained."