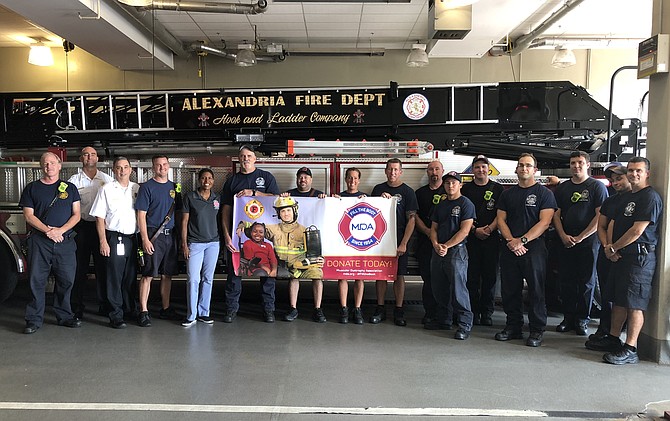 Alexandria Fire Chief Robert Dube, third from left, joins firefighters and paramedics Aug. 28 at Station 209 in Potomac Yard to kick off the annual Fill the Boot campaign to raise funds for the Muscular Dystrophy Association. Photo by Jeanne Theismann.

“Last year, Alexandria firefighters raised $55,000. Our goal this year is to top that.” — Fill the Boot coordinator Michael Korht 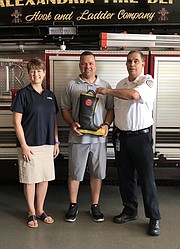 For nearly four decades, comedian Jerry Lewis and the Labor Day weekend were synonymous with raising funds for the Muscular Dystrophy Association. But the partnership between firefighters across the country, including members of the Alexandria Fire Department, and MDA spans more than 60 years and is still going strong.

On Aug. 28, Fire Chief Robert Dube and local firefighters gathered at Station 209 in Potomac Yard to kick off the annual Fill the Boot campaign for MDA, now in its 62nd year.

“Firefighters are our longest running and biggest partner,” said MDA regional manager Jennie King of the fundraising effort that began in 1954 with the International Association of Firefighters.

IAFF Local 2141 and Alexandria’s 10 fire stations are participating in the campaign, which runs from Aug. 30 through Sept. 8.

“From the East End to the West End, firefighters will be at various locations throughout the city raising money for MDA,” said Michael Korht, a paramedic at Station 209 and coordinator of this year’s Fill the Boot donation drive. “Last year, Alexandria firefighters raised $55,000. Our goal this year is to top that.”

Firefighters will spread out across the city to ask pedestrians, motorists, customers and other passersby to make a donation to MDA. Monies raised through the Fill the Boot campaign fund research and life-enhancing programs such as support groups, Care Centers and MDA summer camp at no cost to families.

In 2017, more than 100,000 firefighters across the country participated in the drive, raising $24 million for neuromuscular diseases, including muscular dystrophies, myopathies and motor neuron diseases.

“Since 1954, more than $630 million has been raised through the Fill the Boot campaign,” King said. “We definitely like our firefighters.”

Donations can be made directly to local firefighters or online at https://filltheboot.donordrive.com/team/5690.