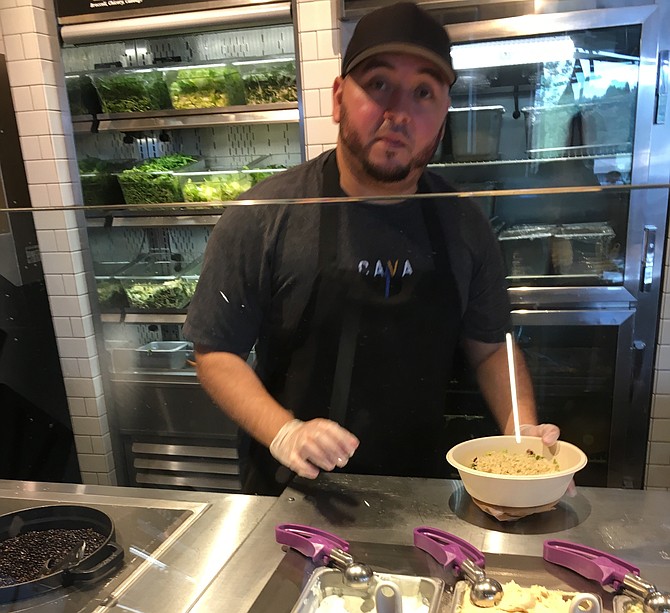 Manager Abel Vena creates a bowl for a customer at CAVA in Cabin John Village Saturday. The restaurant, at the corner of Seven Locks and Tuckerman roads, opened Aug. 8. Photo by Peggy McEwan/The Almanac 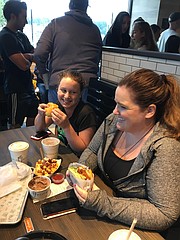 Ariana Kelly and daughter Maeve enjoy burgers, fries and shakes at Shake Shack Saturday. The restaurant was one of three opened in a newly developed section of Cabin John Village shopping center. 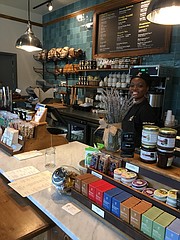 Hungry Potomac residents have three new places to try for breakfast, lunch or dinner now that the restaurants are open and ready to serve their specialties.

Nestled in a new section of Cabin John Village, the former Cabin John Shopping Center and Mall at the corner of Seven Locks Road and Tuckerman Lane, are Shake Shack, Le Pain Quotidien, and CAVA.

The Edens group changed the name of the shopping center and mall to reflect a new vision for the space, Bucklew said.

“We know that Cabin John Village is a special place for this community, and has been for a long time,” Bucklew said in a press release last year. “We wanted to honor that long-standing history by bringing in complementary dining options with a contemporary aesthetic for the neighbors and partners who live and work here.”

The store in Cabin John Village is the first of the chain’s Montgomery County outlets.

The restaurant was full of customers waiting to order, then waiting for pick up on a recent rainy Saturday

Though the restaurant seemed very crowded, diner Ariana Kelly, of Bethesda, said it only took 15 minutes from order to eats.

And they all agreed the fries were great.

As part of their commitment to the community, each Shake Shack teams with a local charity. The Cabin John store selected The Tree House, a child advocacy Center in Montgomery County dedicated to “reducing trauma and promoting healing for child victims of physical abuse, sexual abuse and neglect,” according to the Tree house website.

This month Shake Shack Cabin John will donate five percent of its sale of a special “concrete” — a frozen custard and pie treat spun together, Parsonnet said.

It provides, “simple, elegant boulangerie fare made with healthy, organic ingredients, [where patrons] dine among communal tables that foster a sense of community,” according to a press release.

The restaurant opened on Labor Day, Sept. 3 and has done better than expected, Horn said.

The restaurant specializes in tartines, he said, open-faced sandwiches.

“We cater it to look like art,” he said. “The presentation [matters].”

CAVA, a Maryland original, serves traditional Greek Mediterranean cooking in a fast-casual atmosphere. Diners select the makings of their bowls or wraps cafeteria-style, choosing from a large selection of grains, vegetables, meats and sauces.

“Here you build your own order,” manager Abel Vena said.

The menu changes seasonally, he said as do the many drink selections.

This week lemonade, strawberry citrus, watermelon mint, peach green tea, Jasmine tea and Black tea were available, arranged like a work of art in large urns along the front counter.

He said they have been very busy since opening Aug. 8.

He attributes the restaurant’s popularity to doing “something good.”

“We are doing something good,” he said. “Here we have great service, great food and clean restaurants, that’s what people focus on.”