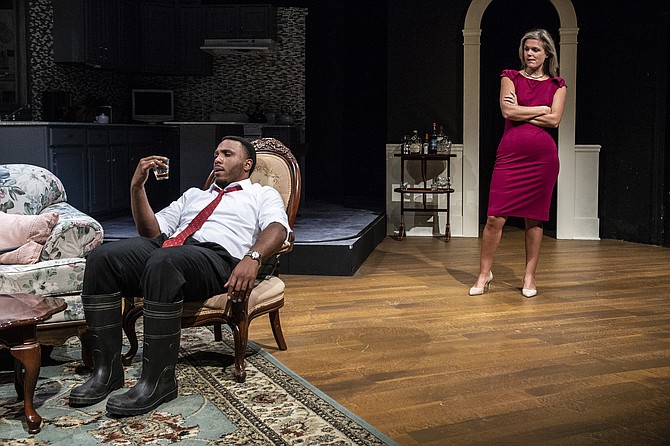 Ayckbourn’s “Hero’s Welcome” is a prickly tale of simmering discord. Who and what can be trusted are key themes. There is plenty of smug condescension from those who think themselves superior with snippets of comic undertones.

Under Alex Levy’s finely-honed direction and his inspired diverse casting, what could have been a tale of nasty, privileged white British citizens becomes enveloping as it careens about.

“Hero’s Welcome” starts with the return of local war hero Murray played by Nick DePinto as a man with plenty of secrets to unravel about his life. Seems he left town nearly two decade before under a very dark cloud. Murray returns home with his young foreign-born wife. She is called Baba for short. She is with limited English language skills providing the opportunity for others to think her not-bright; something they do at their own peril. Baba is portrayed by a charmingly endearing Angeleaza Anderson. Murray and Baba have plans to resuscitate a now seedy hotel called the Bird of Prey.

War hero Murray is the petrol who lights disruptive fires under the assured public façade of his home town’s upper crust. One coiled-up couple is portrayed by Anna Bowles as Kara, a verbally abused wife living in a decorated cell of a prison, as she calls her home. Her abuser husband Brad is played by Clayton Pelham Jr. as tormentor-in-chief full of hostility and contempt.

Another couple is composed of Lisa Hodsoll, persuasively playing Alice, an agonized, glum town Mayor with secrets of her own and James J. Johnson as her timid husband Derek with model trains as his diversion from reality.

Ayckbourn penned a play not for those with little appetite for verbal or emotional assaults about marriage and wartime. “Hero’s Welcome” also has some overlong scenes that add little but time to the proceedings. But, under director Levy’s fine touch and the cast’s acting talents, the play has a reflective air that leaves its mark with a fiery conclusion.