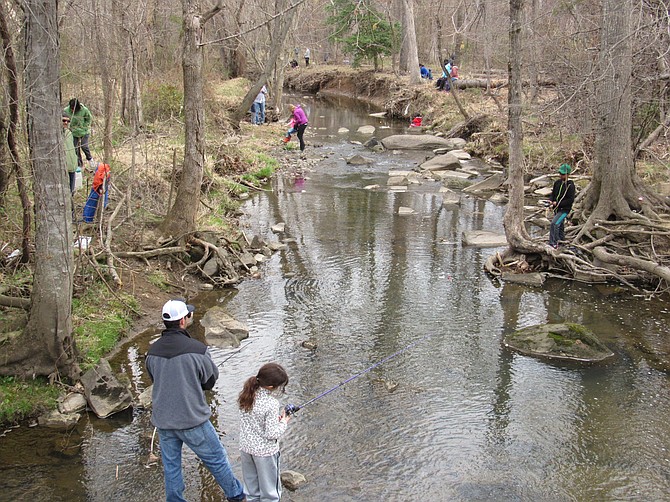 Families enjoy a warm spring morning along the stream banks of Sugarland Run in Herndon during the 2019 Kids Trout Fishing Derby. Photo by Mercia Hobson. 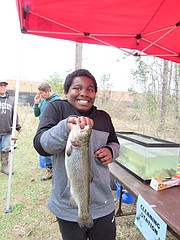 Zhion Fabian, 10 of Centreville, gingerly holds the first fish he's ever caught in his life. Fabian participated in the 2019 Kids Trout Fishing Derby put on by Herndon Parks and Recreation. 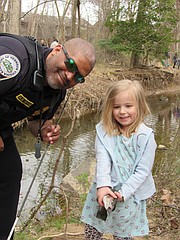 Penelope Harr, 4, holds her first catch of the day after Sergeant Hank Ruffin of the Town of Herndon Police Department helped her hook the rainbow trout during the 2019 Kids Trout Fishing Derby produced by Herndon Parks and Recreation.

Photo by Herndon Parks and Recreation

From left, staff from the Town of Herndon and Laurel Hill Trout Farm, Inc. work to transfer three hundred Rainbow Trout to Sugarland Run Stream in Herndon for the 2019 Kids Trout Fishing Derby.

For families who wanted to introduce their children to trout fishing and perhaps provide them with a deeper understanding of the environment, the 2019 Kids Trout Fishing Derby, held at Sugarland Run Stream, located behind the Herndon Police Station, offered the perfect opportunities.

"They learn a little about how to fish, about the trout species and conservation,” added John L. Dudzinsky, Community Forester, Town of Herndon who was on hand to support the derby.

Since Northern Virginia lacks cold freshwater streams where wild trout can survive and spawn, the day before the derby the Department of Parks and Recreation accepted the delivery of three hundred Rainbow Trout purchased by the Herndon Fraternal Order of Police Lodge #64 from Laurel Hill Trout Farm, Inc. The Department of Public Works assisted in transferring the trout to the stream, said Lander.

With the stream stocked for success, more than one hundred children arrived for the exciting springtime angling experience, said Lander. Veteran youth anglers brought their tackle boxes and rods. They quickly cast their lines trying to outsmart the crafty sport fish. Those who did triggered exciting reaction strikes from the Rainbow Trout as they thrashed wildly about often leaping out of the water some getting away in the process.

NOVICE ANGLERS like Zhion Fabian, 10 of Centreville, borrowed one of the provided rods. Shortly into the second hour, Fabian pitched his line into a high-percentage area of pocket water where trout hid. One struck, and Fabian hauled in his catch. He hurried to the cleaning table, staffed by Northern Virginia Chapter of Trout Unlimited (NVATU).

Since the fish was not a catch and release, Tim Quinn of NVATU showed Fabian how to hold the trout by the gill for a photo. "This is the first fish I've ever caught," Fabian excitedly said as he held it up. Asked what it felt like to hold the fish, Fabian said, "It’s the weirdest thing, rubbery."

Logan Harr and his daughters Penelope, 4, and Genevieve, 3, fished from the shoreline. Standing nearby, Sergeant Hank Ruffin of the Herndon Police Department showed a group of children how to spot Rainbow Trout in the deeper shady water and drift their lines to ensure success. When a trout showed interest, Ruffin quickly handed the rod to Penelope Harr. Together they reeled in the catch.

Sgt. Ruffin admitted he is a man stoked for sharing his joy and thrill of fishing with others. "I have a passion for fishing,” he said. Ruffin said he, his police friends and other volunteers were there to teach children how to fish, hopefully sparking a life-long love affair with the sport. "The whole point of the Kids Fishing Derby is to get the next generation of anglers for Herndon," Ruffin said.

George Paine, Secretary, NVATU praised the town for its efforts and called attention to Town Forester John Dudzinsky, who Paine said, “helps introduce young people to fishing … the window to the environment around us."