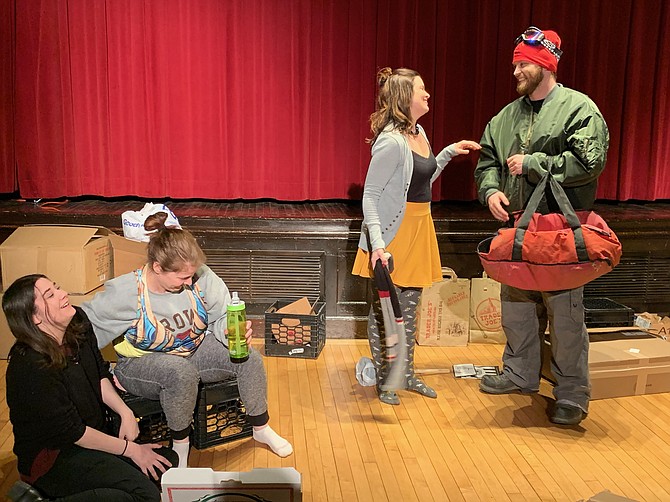 Dark Horse Theatre Company presents the regional premiere of the dark comedy, “The Value of Moscow,” by Playwright Amy Dellagiarino, April 12-27 at ArtSpace Herndon, 750 Center Street located in the Herndon Arts District. "This is a unique opportunity to have a play written by a Reston-Herndon native, now successful LA playwright and Dark Horse return to Herndon," said Natasha Parnian, Managing Artistic Director.

Both Dellagiarino and Parnian were originally from Reston and graduated from South Lakes High School in the early 2000s.

According to the production preview, "Three grown ‘adult’ sisters are thrust back into living together as a last resort after their various lives have fallen apart. This trio can't even agree on how to unpack their stuff, much less their relationships and pasts. And before they can finish the bottle of vodka they found in the kitchen, everything goes from bad to worse, to a lot, LOT worse. Can they set aside their grievances long enough to work together and save themselves? Probably not. But with acerbic wit and an encounter with the pizza man, these three sisters aim to find out."

Parnian cautioned that the play is recommended for an adult audience. "It contains strong language and comedic violence,” she said.

"ArtsHerndon is delighted to partner with Dark Horse Theatre,” said Joanna Ormesher, President & CEO Arts Herndon. The opportunity for modern theatre writers and performers to have black box space to produce new works is invaluable. Artspace allows just that prospect. Later in the season, we will be collaborating on a similar project with NextStop Theatre Company. These are new and groundbreaking opportunities for the Arts in Herndon."

For tickets and information, visit www.darkhorseva.com or call 703-537-1071. Limited engagement and seating.