A Jewel With Uncomfortable Truths in Herndon
Votes

A Jewel With Uncomfortable Truths in Herndon 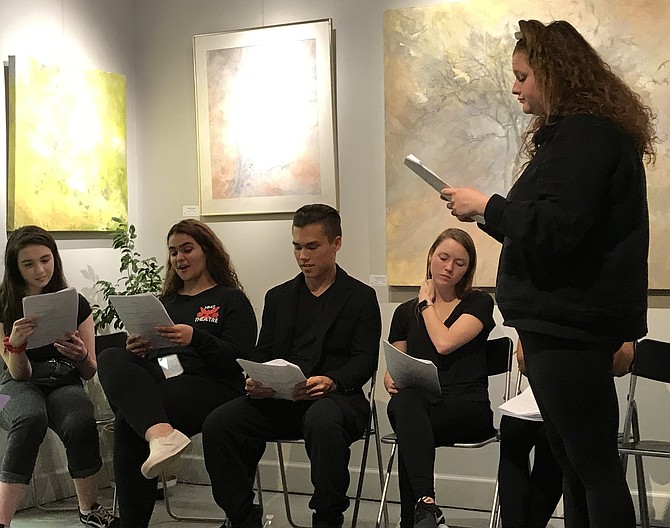 Herndon High School Theatre presented a staged reading of ‘Herndon Town’ by playwright and novelist Kristen LePine on Friday, Oct. 11. Conceived and directed by Scott D. Pafumi, the high school's Theatre Arts Director, the project was one of the many activities celebrated during 2019 Herndon Arts Week, an initiative of Arts Herndon. According to Town Proclamation, the designated week provided a focal point to celebrate the unity created by the town's diverse cultural heritage through the arts as it demonstrated the vitality of community artists across all fields.

Originally commissioned by Herndon Middle School and performed as a one-act play in 2015, Pafumi chose to reach out to the community and perform the piece at an alternative venue, ArtSpace operated by Arts Herndon and in an alternative form, a staged reading. "We are super delighted to bring back this little jewel of a play. …As the new theatre teacher at Herndon High School, I want to make as many community connections as possible," said Pafumi.

The script swiftly chronicled the town's 100-year history from village status in 1858 to the present and captured the essence and struggles of what makes a community special with humor and honesty while at the same time probing some uncomfortable truths.

THE READING showcased a selection of teen thespians from Herndon and Reston, students at Herndon High who dressed in the uniformity of black rather than costumes. Being a sit-down reading with the actors in chairs configured in a semi-circle conducive to their character's relationships, it put them feet from audience members. Even with the reading's simple attire and a short rehearsal schedule, the production affirmed that performing arts are pivotal to the enhancement and enrichment of human expression, especially to its youth actors.

"I chose to do this show because the world is a sea of art, and acting is my ship," said Isaiah Hagee, 17.

For Meena Megahed, 15, and Abigail Westman both of Reston, they chose to participate in the staged reading for a variety of reasons. For Westman, she chose to participate to be part of the school’s theatre program while acting. Megahed said, "Because I am the happiest when doing theatre."

While Amy Sacks said that she had never participated in a staged reading and decided "to try something new," her fellow cast member, Tina Thayer, 17, was an old hand at it. "I was in middle school when ‘Herndon Town’ was first written; I’m here tonight to honor the origin of our town and inspire hope for the future," Thayer said.

For other actors, “Herndon Town” revealed what the village once was and how it changed to be the Herndon of today, according to actor Roland Lamoureux. “I volunteered to be part of ‘Herndon Town’ because I love theatre, and I love Herndon," said Lamoureux.

For Leilani Johnson, 16, part of the script stunned her and presented an uncomfortable truth. “I was shocked to learn about the civil rights conflicts Herndon had in the past. I am African-American, so this story in the play hit me the hardest," she said.

COMING SOON: Hendon High School Theatre presents the 2019-2020 Season of Royalty and invites the public to the classic Shakespearean tragedy “Hamlet” performed on Dec. 5-8 and Stephen Schwartz's musical “Pippin” that will be presented April 30-May 3, 2020. For ticket information and to support HHS Drama Boosters Club Inc., visit herndondrama.org.