Serving up ‘Little Shop of Horrors’ in Arlington
Votes

Serving up ‘Little Shop of Horrors’ in Arlington 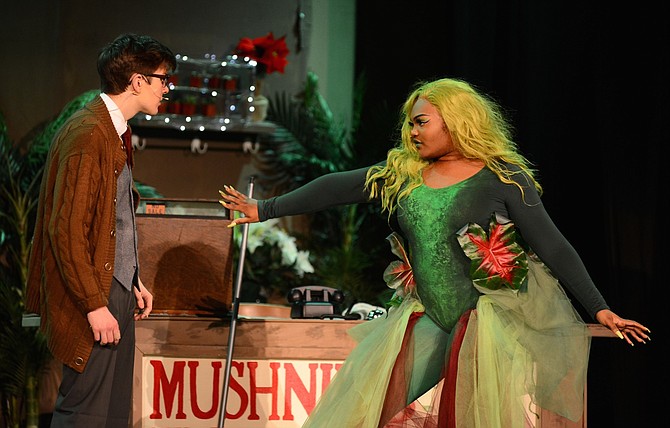 The Doo-wop girls (Gwendolyn Zorc, Zoe Forino, and Olivia Oudkirk) started the show off on the right foot with their strong harmonies, capturing the essence of the ‘60s-inspired music. They were remarkable in keeping their energy and vocals consistent throughout the show, a daunting task for actors with that much stage time. The girls blended in perfectly with the clean, time-period appropriate set, equipped with doors and stairs that enabled the characters to infuse more depth and reality into each scene.

Audrey (Kyleigh Friel), Seymour's co-worker and love interest, is responsible for some of the more heavy themes in the storyline. A girl with very low self-esteem, Audrey ends up dating an abusive man. Friel's captivating vibrato and commitment to character made these emotional scenes highly effective. Playing alongside her, Seymour (Ethan O'Donovan) engulfed the stage in his energy as he acted, and used his smooth, endearing voice to advance the plot. He and Audrey paired beautifully together, as their sweet and subtle chemistry contrasted greatly with Seymour's interactions with the greedy plant.

This hungry, evil plant (Audrey Somerville) stole the show. As soon as Somerville stepped out of the leaves of the plant, she commanded the stage with her striking vocals and exploding energy. Each song she was a part of was immediately transformed as a result of her magnetic presence and strong, controlled runs.

The dark humor of this show was expertly carried out by cruel dentist Orin (Paul Ward), who was also Audrey's boyfriend at the beginning of the show. His physicality and terrific comedic timing made the audience laugh almost as much as he did when he died from the laughing gas. Ward was aided in these hilarious moments by the Doo-wop nurses. Together, they used their energy to add small, but significant details to the show, and provide a little bit of interaction between the audience and the characters.

The technical elements of show matched the talent of the cast. The plant wouldn't have been believable if it wasn't for all of the hard work that went into its building and performance. The painting and detail on the plant as it grew was artfully done, and the puppeteer skillfully maneuvered the mouth to move with Somerville's words. Similarly, the costumes of the show were time-period appropriate down to every last detail. Some of them were also handmade, a challenging feat for high schoolers, but handled at a professional quality nonetheless.

Bishop O'Connell's accomplished cast used their passion and enthusiasm to put on an incredible performance of "Little Shop of Horrors." They made every audience member suddenly want to see more of them on stage.