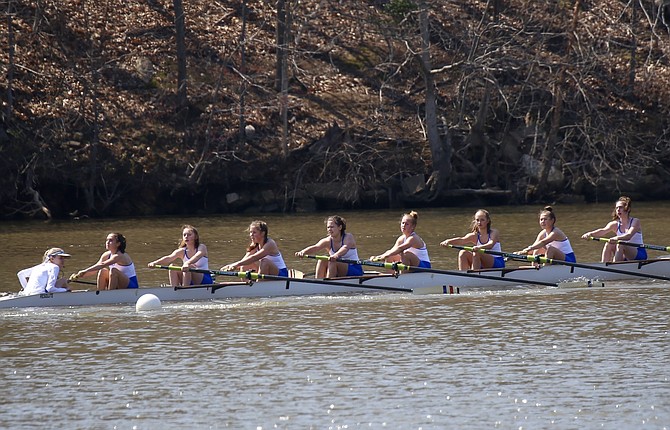 Turtles sunned on branches and a light breeze was blowing as dozens of boats swept by in the Virginia Scholastic Rowing Association’s first regatta of the season. Parking was at overflow as usual as hundreds of people arrived to cheer on the rowers.

“We were really nervous about facing them,” said coxswain Maddy Glanz. “But we were strong all the way through and all the rowers tried their best, even with Lake Braddock crawling up on us at the end.”

“I’m excited to see if we can crawl up on Wakefield and give them a run for their money,” she added.

A women’s varsity double with Maggie Coombs and Grace Wilmore took first with a time of 5:58.10, topping doubles from Mount Vernon and Forest Park. It was the first race for the team.

“Going into the race, man, I was scared of a lot,” said Coombs. “We didn’t really know what our competition was like, but when we saw them, they didn’t look too menacing.”

Next week, the rowers return to Occoquan for the Darrell Winslow Regatta.