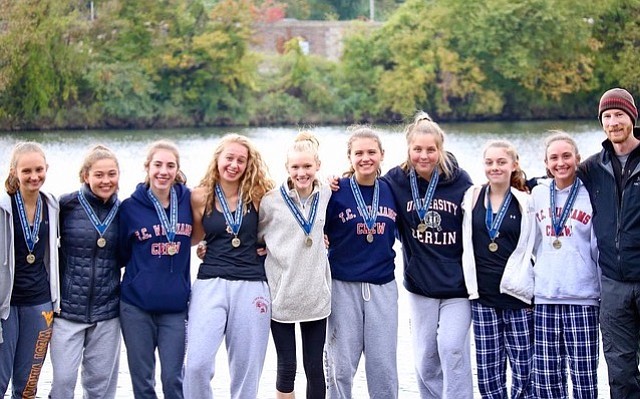 ODBC’s women’s freshman eight rowed to a third-place finish with a time of 15:52.262. Photo courtesy of T.C. Williams Crew Boosters

ODBC’s women’s freshman eight rowed to a third-place finish in one of the biggest races of the fall season, the Head of the Schuylkill.

The race takes place on Philadelphia’s Main Line, past the city’s historic boathouse row. Nearly 9,000 rowers typically compete in the 40-year-old regatta. This year’s race took place on a cold, damp day, when delays related to the sheer number of rowers meant teams waited on the river long past scheduled start times.

“I was worried about the time because we started 40 minutes late, and I was scared the girls were getting cold,” said Maddy Glanz, freshman eight coxswain. “Also, before the race, my microphone broke, causing us to have to rewire the whole boat. Thank goodness we got it done in time.”

Men and women’s ODBC fielded 23 boats at the Head of the Schuylkill. This season, ODBC has drawn rowers from T.C. Williams, Bishop Ireton, Washington & Lee, Wakefield, James Madison, McLean and Maret. Fall season gives a chance for rowers to get to know each other across schools. “It makes the spring season less intimidating,” said Caroline Miles, women’s 2V coxswain. “This program opens up the doors to new people and friendships.”

Next week marks the last regattas of the fall rowing season, as ODBC lightweight boats travel to Head of the Hooch, and the rest of the club heads for Head of the Occoquan.