T.C. Williams Crew Medals in First Round of State Championships

Rowers bring home a Gold, 4 Silvers, and a Bronze. 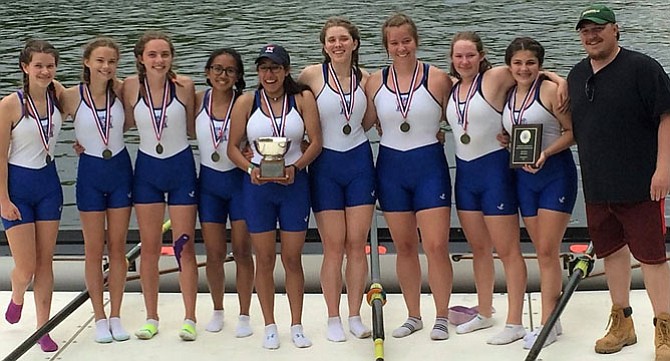 The T.C. Williams Crew Team entered eight boats in Day One of the Virginia Scholastic Rowing Association (VASRA) championship series on May 5, and by day’s end, six of those boats brought home medals and a State Championship trophy.

Day 1 of “States” included 132 junior boats from 34 schools/clubs, featured favorable weather and racing conditions, and had its share of elation and achingly close finishes as rowers competed in morning heats to set the water for the 1500-meter finals with the six fastest boats in Virginia in each race category. All eight boats that TC brought to the competition made the finals.

VASRA Championship races usually are decided by a second or two, as boats tested by a season of competition compete at the top of their game. Sometimes the winning margin is as little as a tenth or hundredths of a second, as rowers pursuing a medal call on their last ounce of strength from aching muscles to pull their oars in exquisite unison with their teammates.

For the Virginia State Champion TC Women’s Third 8 boat, it wasn’t a razor-thin photo finish, or a second, or even a two-second margin of victory.

Putting the capstone on the season, the TC Women’s Third 8 over-performed at States as they had at earlier regattas this spring. In their final race of the season, the 3-V-8s stormed down the course on a 5:39.30 gold-medal sprint, beating Colgan (5:52.90) and Jefferson (5:57.63). The 2018 State Champion TC Women’s Third 8 includes rowers Grace Willmore, Ellie Nebolsine, Cameron Bowman, Annalise Roberts, Lillian MacBride, Emily Surratt, Julianne Joven, and Maggie Coombs, and coxswain Zaida Calix-Tello.

“Saturday's race was the culmination of an extraordinary season,” said TC Women’s 3-V-8 Coach Chris Ottie. “This is the most motivated and tenacious boat I've ever had the honor to coach — always ready to race to their limit, whether they just finished rowing 16k [16,000 meters in practice] or an upper boat in their day's competition [at a regatta]. There were lines of rowers at the end of every practice looking for any possible improvement to give them that edge to earn their seat, and complaints that recovery workouts were too light.”

“About a month ago the boat started to truly find its swing and dropped over 30 seconds [over 1500 meters] in two weeks,” he continued. “All their effort and training paid off Saturday, the pinnacle of their season — a Gold Medal at the Virginia State Championships.”

Following their victory a week earlier at the Charlie Butt Regatta and an early morning heat victory time of 5:05.00, the TC Men’s Junior 8, including rowers Townson Cocke, Adam Elnahas, Carl Chidlow, Jr., Christian Burrell, Tom Schmolcke, Jonathan Hernandez, Kenneth Crumm, and Griff Austin and coxswain Clare Williams, set their sights on the VASRA final. In one of the last races of the day, the J-8s shaved over 20 seconds off their morning heat time in a two-boat battle to finish at 4:42.10, just 1.2 seconds behind South County, and claimed the Silver Medal.

T.C. Williams Men’s Head Coach Peter Stramese stated that he is “quite impressed by the speed of this particular TC squad, who’ve done a ton of work and are faster than their size might suggest. We produced our best course time for the season thus far, and happened to be just slightly outmatched that day by South County and won the silver. Congratulations to Coach Brandon Tucker and his crew on the win. SoCo is becoming a team to reckon with. We look forward to a rematch at [the] Stotesbury” Cup Regatta in Philadelphia on May 18-19.

Also claiming Silver Medals were the resilient TC Men’s Frosh 8, whose fast 4:57.15 finish in their final was only 1.35 seconds behind McLean and over 10 seconds ahead of third-place Madison. The Frosh 8, including rowers Noah Schuerhoff, Barry Najarro-Blancas, Harris Babin, Matthew Posson, Stephen Ralis, Braden Porterfield, Anthony Castellano, and Patrick Kenny and coxswain Jake Solomon, will make their first trip to the Stotesbury Cup Regatta in a couple weeks.

TC’s upper boats compete in Day 2 of the VASRA State Championship series at the Occoquan Reservoir on May 12.