Veg Fest in Herndon Promotes ‘Time for a Change’
Votes

Veg Fest in Herndon Promotes ‘Time for a Change’ 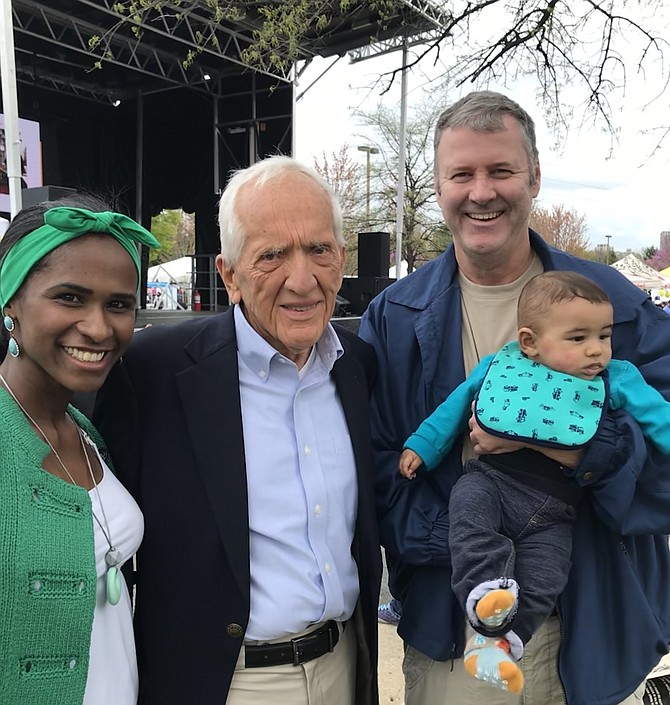 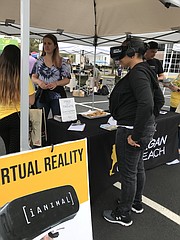 An attendee at Veg Fest watches a virtual reality viewing of what the meat industry allegedly doesn't want people to see. 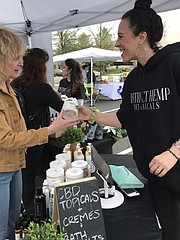 "It's a journey for everyone. Sometimes it takes years, if not decades," said Gwyn Whittaker, CEO GreenFare Organic Café and co-sponsor with Mike Young of the inaugural Fairfax Veg Fest held Sunday, April 13 in Herndon. According to Young, who is also President and Founder of aPlantBasedDiet.org, the purpose of the Veg Fest was to educate the public on the advantages of a plant-based and vegan lifestyle for the benefit of human health, the environment and compassion for animals.

Visitors to the fest had the opportunity to visit 60 healthy living and eco-friendly vendors with exhibitors, restaurant booths and cooking demonstrations by Mimi Clark, Danni McGhee, Pericles Silva and Sharon McRae. Only vegan foods, beverages and products were sold on-site.

Tom Stripling of Reston came to see what kind of veggie food was offered. With a selection of donuts that won the Best Gluten Free Sweet category at the DC Gluten Free Expo in 2018 by Sweet Crimes to plant-based hot dogs made from sunflower seeds, beets, potatoes, carrots, sweet potatoes, gluten-free flours, herbs and spices by Yeah Dawg!!!, there was something for everyone.

Caryn Ginsburg said she wanted to learn more about products such as CBD. "There's a lot of buzz about CBD, and this is a great chance to be with a lot of providers and talk with them,” she said. Ginsburg spoke with Jessica Hinton, event manager, District Hemp Botanicals. "District Hemp Botanicals offers CBD infused products," Hinton said. The store's online site stated, "(it) boasted a comprehensive selection of varying hemp products with naturally occurring cannabinoids ranging from oils to hemp-infused dog treats."

ALL DAY, bands and singer/songwriters such as Buntopia, the Stewart Sisters and Crys Matthews added to the festival atmosphere. The speakers, though, were the rock stars of the Veg Fest. Eric O’Grey, who lives in Washington, D.C. and works as Director of Philanthropy for Physicians Committee for Responsible Medicine, spoke on how at 340 pounds and 25 years of failed diets, he met a doctor who did not prescribe another medicine, but instead a middle-aged and a rather heavy rescue dog. Together, they adopted a plant-based diet, exercised and regained their health.

The star speaker by attendance levels though was T. Colin Campbell, Ph.D., co-author with his son of the best seller, "The China Study," selling more than 2 million copies. In it, the authors described the dangers of a diet high in animal protein and the benefits of a plant-based diet.

Eric Fielding of Herndon and his wife Maria looked forward to hearing Campbell speak. Fielding held his 4-month old son, Thomas. "I have been a huge fan of Dr. Campbell for many years, and have followed him in documentaries as well as reading his books. After Maria and I got married, we have both continued to follow a healthy plant-based diet," he said.

THE DAY AFTER the Veg Fest, Whittaker reported an estimated 5,000 people attended the seven-hour event supported by a team of 70 volunteers, staffing by NWFCU. "People came to learn from some of the rock stars in nutrition, enjoy music and great food and socialize with others on a journey to health for themselves and the environment, in a compassionate way," Whittaker said.

"I think people came for the great speakers who attended,” Whittaker said mentioning Dr. T. Colin Campbell of one of the most watched documentaries on Netflix, "Forks Over Knives" and Dr. Neal Barnard, President of the Physicians Committee for Responsible Medicine.

Not only did Young and she co-sponsor the event, Whittaker said, "but a tireless committee assisted: Pat Barton of Party D.C., Terri Siggins of Fairfax Food Council, Pericles Silva, GreenFare Organic Cafe, John Foster, Evan Bass and Leiah Rocheleau. NWFCU was a gracious host and provided staffing to support the event on their location. We plan to do it again next year with improvements to a few small details. We were thrilled at the turnout and the success.”