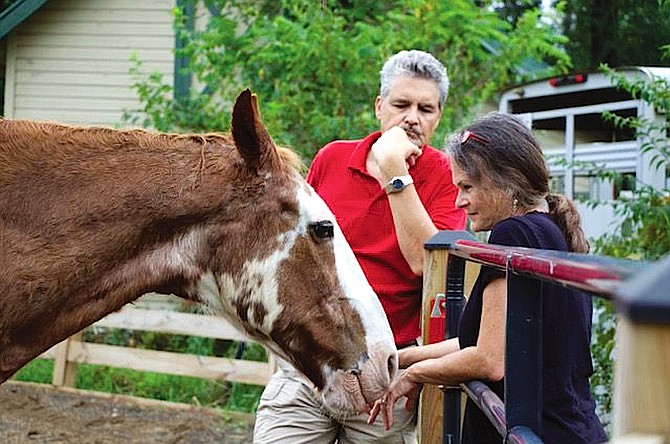 Richard Griffin observes a client interacting with Al, a horse at Little Burgundy Farm, before she enters the round pen. Photo contributed

Local life coach Richard Griffin believes interacting with horses is sometimes more beneficial to his clients than interacting with people. That’s why, in 2014, Griffin began taking his clients to Little Burgundy Farm and using their experience at this small stable to guide the rest of their therapy. The method, called equus coaching, combines the practices of equine therapy and life coaching to create a space where clients enhance their leadership, communication, and relational skills through working with a horse.

“Horses can’t lie,” Griffin, who is certified both as a life coach and an Equus Coach Master Facilitator, said. “Any issues my clients have — negative emotions, passivity, aggression, self-doubt — all come out when a horse doesn’t respond well to what they’re trying to get it to do. If you’re sending out negative messages through your body language and communication, you may never know it until you work with a horse because people will never be as blunt with you as they are.”

A movement begun by Californian life coach Koelle Simpson in 2006, equus coaching seeks to, as stated on Simpson’s website, restore clients’ “empowerment and self-trust” by using the horse as a “mirror” of their emotions. To generate this effect, the coach puts their client in a round pen with a horse attached to a lunge-line. After a short demonstration, the coach then asks the client to make the horse perform certain small tasks, such as walking in a circle around them, trotting, or changing direction.

“Whenever a crisis arises in the wild, a herd of horses will always follow whichever of them seems to have the clearest, most calm idea of how to escape,” said Griffin. “I help clients learn to be good leaders, good communicators, good employees, whatever by teaching them to communicate in the clearest way possible what they want to happen without using words.”

While the ultimate goal of equus coaching depends on the client, Griffin said his clients primarily want to work on their relationships — whether that be with a partner, boss, child, or parent. Griffin also uses horses in team-building workshops with corporate groups, in leadership coaching for those stepping into positions of power, and for those simply wanting to find out more about themselves. Most of Griffin’s clients have little to no prior experience with horses.

Pam Ray, founder and CEO of Building STEM Bridges and STEM4Parents, said that Griffin’s equus coaching made her a more effective leader as she was starting her business.

“I grew up in a thinking world,” said Ray. “But it turns out horses don’t communicate based on thinking. They communicate through feeling, intention, and vision in the moment. They wait for you to lead, follow when you do so well, and show pride in their energy and stance when together we achieved a common mission in the ring. Now, that pride is exactly the outcome I want with clients, business partners and even my family.”

Griffin often uses horse work as a way to identify his client’s issues in the first session. Then, he and the client discuss observations they both made during that session in future traditional life coaching sessions.

“Life coaching is different than traditional therapy in that we are preparing the client for the future rather than trying to solve issues in their past,” Griffin said. “By getting my clients in front of a horse, I can see what’s going on inside them emotionally just by watching the way they and the horse interact in the first session. If their first reaction is ‘I don’t think this horse likes me,’ for example, I know there’s a little insecurity going on. Then we can integrate what I observed and what they learned with the horse and apply it to their lives in future sessions.”