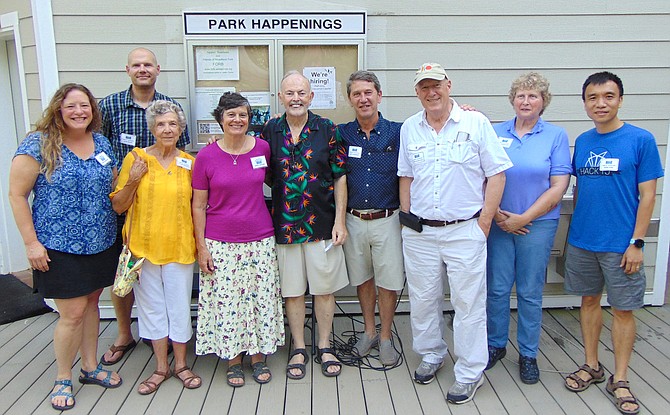 From left: Hugh Morrow, President of the Friends of Riverbend Park; Tim Hackman, Dranesville District representative on the Fairfax County Park Authority Board; and Cathy Mayes, former President of FORB.

About 100 Friends of Riverbend Park (FORB) helped celebrate its 20th Anniversary on Sunday, Aug. 4, 2019, at the park located along the Potomac River in Great Falls. The event catered by the Old Brogue Irish Pub in Great Falls was an opportunity to thank its generous supporters through the years.

According to Hugh Morrow, President, FORB: “This is a thank you celebration for everybody, particularly for those people who have really supported us. I could name 20 or 30 people here who have given over the last 20 years – $100, $500, every year. They’re very good supporters here; it’s a really good community to work with. I really enjoy helping the park out.”

IN THE TWO DECADES, FORB has supported Riverbend with $258,000 in contributions, services and equipment. Its members have made possible summer camps, the Native Plant Sale, and the Native American and Bluebell Festivals. FORB also has funded field trip scholarships for school children, a bass fishing boat, telescopes, water quality measuring equipment and canoes.

The Friends have 213 dues-paying members and 400 on its mailing list. Some generous contributors are residents who live near the park along River Birch Road, Jeffery Road, Eaton Park Road and Weant Drive in Great Falls, said Morrow.

He said that generally, the friends organization is able to donate anywhere between $25,000 to $35,000 per year to the park. He said they help support all sorts of programs, including the boat rentals and summer camps. For example, they give $14,000 annually to the summer interns program, who are college-age environmental majors who help the staff run the park programs. The Friends also bought 10 canoes last year, and a $15,000 bass fishing boat that’s used for fishing trips to rent out to parties.

The Riverbend budget is $700,000 a year, half of which comes from Fairfax County Park Authority funds. The rest comes from revenue generated by the park – through the boat rentals and summer camps, said Morrow.

Tim Hackman, Dranesville District representative on the Fairfax County Park Authority Board, said: “Riverbend Park is a real jewel in the crown of the Dranesville District Parks. We’re all very proud of the county park system, but we love Riverbend; it’s a neighborhood park. And the community has really rallied behind it to support it, and to engage, they enjoy coming here, walking along the river, walking their dogs, meeting their friends, sitting on the deck. It’s just a lovely location.”

He added: “The Friends of Riverbend Park has been a tremendous asset to the Park Authority broadly as well as to Riverbend Park, specifically. Their financial support; there being a sounding board for the community’s feelings about the park and how we’re handling our staffing, our maintenance upkeep and the Master Plan – all those issues. They’ve just been a marvelous asset for us.”

CATHY MAYES, former president and founder of Friends of Riverbend Park, added: “This was a very quiet corner in the day when I was involved. It was such a quiet corner that there was a move afoot to close the park, and that’s what got the neighbors motivated to say, ‘You can’t close this park.’ And that led to the beginning of Friends of Riverbend, and put this little group on the map. I’m so impressed that it’s very active.”

She added: “It’s exciting – the idea of keeping this park alive has been so successful. Now It’s completely innervated by the help that the Friends have given it and the attention it’s gotten through the years. It’s a different place; it’s much better for it.”

According to Nancy Waugh, Director and Secretary for the Board: “The Friends of Riverbend Park has been a great organization for the Park, and our relationship with the Park is really good. We’re really excited to be able to help support the park. Everybody in the area really loves it. We’ve had a lot of support from the community to help the park in running some of their programs – like the internship for the summer programs and support for scholarships for Title One schools. We’re very excited that we’ve lasted 20 years and have done a lot of good for the park.”

To reach Riverbend Park, call 703-759-9018. Information about the Park Authority’s Friends Groups is online at www.fairfaxcounty.gov/parks/friends.