People: Political Scientist by Day and Writer by Night
Votes

People: Political Scientist by Day and Writer by Night 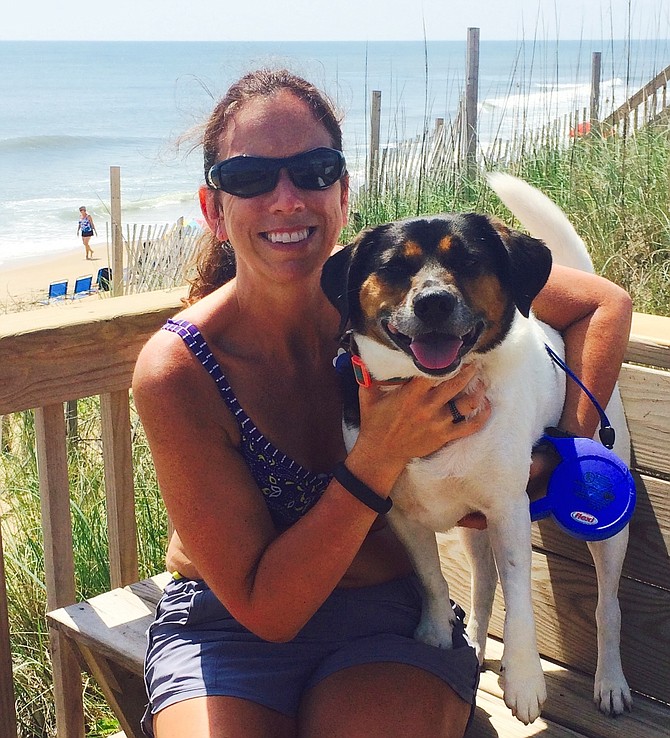 Colleen Shogan and her dog Conan, who is better known as “Clarence” in the Washington Whodunit series.

Arlington mystery author Colleen Shogan was on her weekly Friday evening walk a few years ago when the idea for her first “whodunit” novel struck.

“Seven or eight years ago, during my walk, my mind started to wander,” said Shogan, an Arlington-based political scientist and writer. “I’ve always read a lot of mystery books, so I remember thinking, ‘If I wrote a mystery book, what would the plan be?’ When I got home, I did the smart thing and wrote down all my thoughts, which ultimately was the basis for my first fiction book, ‘Stabbing in the Senate’.”

“Stabbing in the Senate” was the first book in Shogan’s political mystery series, with protagonist Kit Marshall, a bureaucrat and amateur detective. This summer saw the release of Shogan’s latest title, “Gore in the Garden,” which takes readers on another ride after a murder at the United States Botanic Garden in Washington, D.C.

Published by Coffee Town and Camel Press, “Gore in the Garden” is the fifth in a series of what will be at least six books.

“Readers like to see characters develop over time, and we’ve watched Kit Marshall change and grow into her job,” said Jennifer McCord, executive editor and associate publisher for Coffee Town and Camel Press. “Kit is a very likable, amateur sleuth at the center of the government’s inner workings. She never gives up until she solves a case. Readers like the continuity of a community of characters, too, and that’s what we’ve seen from [Shogan’s] series. She’s kept many of the characters in all five books that she’s started with. People like reading what’s going on with her boyfriend, friends, and her dog, Clarence.”

Reading Shogan’s books also gives readers a glimpse into the realm of Washington D.C., and the culture of Capitol Hill.

“Readers get to travel to the places they read about, and Washington D.C. is particularly intriguing,” McCord said. “We always tell authors to write what they know, and readers trust Shogan’s political insider’s view, and that she knows what she’s writing about in her mysteries. With ‘Gore in the Garden,’ for example, you experience the US Botanic Gardens. That’s a big part of the appeal.”

It’s not just national sites, either.

“I also include a lot of Arlington landmarks,” Shogan said. “Kit works in D.C. but lives in Arlington, so there are a few restaurants and stores, like Liberty Tavern, Green Pig, and The Italian Store. I work those local areas and businesses into the mysteries to give it a little of a neighborhood feel. A few of my readers have told me that they’ve visited Washington D.C. and visited the places referenced in my books.”

Shogan is a political scientist by day and a writer by night (literally – she does all her fiction writing at night and weekends). These days, her political insider perspective comes from the Library of Congress, where she is the assistant deputy librarian for Collections and Services. And for years before Shogan began her work with the Library, she – much like her leading character, Kit Marshall – worked on Capitol Hill. She served as both a legislative staffer for the United States Senate and as the deputy director of the Congressional Research Service.

The idea for Kit Marshall had likely been percolating somewhere in the back of Shogan’s brain long before she began putting pen to paper.

“In some ways, Kit Marshall was maybe forming for some time,” said Shogan, who has her Ph.D. in politics from Yale University. “I’m an observant person by nature. I like to see how people behave, and I pick up on their foibles and quirks. I really enjoyed watching people on Capitol Hill, a real cast of characters — not just the politicians, but also the other staffers. A lot of them became my friends. So, Kit is an amalgamation of a bunch of these people — of a lot of women I met on the Hill. Even though a lot of people think Kit is me, she’s not. She is daring and takes a lot of risks I wouldn’t. She does what it’s necessary for a sleuth to do.”

Shogan focuses on the sleuthing and keeps tense topics out of her books because she knows we’ve all seen our fair share of political drama play out in the real world.

“You can’t have a Capitol Hill based mystery without politics, but my books aren’t partisan or ideological,” Shogan said. “I didn’t want to write mysteries for just the right or the left, so people from across the partisan spectrum can read them. A lot of news coverage today is very negative, telling conflict-ridden stories about DC, so I want to try and tell some of the stories that have nothing to do with ideologies.”

Shogan’s own interest in government is in no way rooted in polarizing politics.

“I didn’t come from a political family,” said Shogan, who grew up in Pittsburgh. “My parents were civically engaged, and voters, but I was always much more interested in it. I was in high school during the 1992 presidential election. It was an exciting time to be engaged in politics, with Ross Perot, Bill Clinton and George H.W. Bush running. Pennsylvania was a swing state even then, and I went to all the rallies. That was what got me very interested and energized about a political science major.”

Long before Shogan was reading political science textbooks, she was regularly delving into all kinds of mysteries.

“I’ve always been a big mystery reader, really since I was 6 years old,” she said. “When it got to the time when I was writing my own, I did a lot of research on story structure, and how much detail to include. It wasn’t like I set out to do it, it came to me. This goes to what Stephen King always says — you can’t be a writer unless you’re a reader. I agree with that. If you’ve read a lot, you can do the writing because you understand the arc of stories, what makes for a good plot twist.”

There are plenty of plot twists in “Gore in the Garden,” which is complete with murder, complicated family relationships, and even romance. And, much like with the whole concept of the series, Shogan thought of these story elements as she was going about her daily life.

“When you’re in front of the computer, you feel pressure to produce,” Shogan said. “A lot of things come to me as I’m driving to work, and then when I get there, I make notes in my iPhone. I exercise most days too, which is good for my creativity, and, of course, I still take my walks. Even with the smallest details, I never know when things are going to come to me.”

“Gore in the Garden” is available through all major book retailers, including Amazon.com.

Residents can also meet Shogan at a book talk and signing event alongside other local mystery writers on the evening of Thursday, Aug. 22 at One More Page Books in Arlington.