Centreville and Chantilly: What’s on the Local Horizon
Votes

Centreville and Chantilly: What’s on the Local Horizon 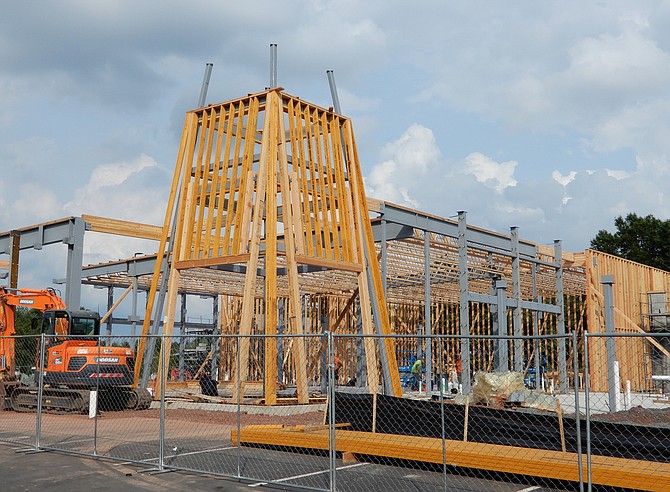 The Lazy Dog Café is under construction in The Field at Commonwealth shopping center. Photo by Bonnie Hobbs.

Artist’s rendition of the Sully District Community Center in Chantilly.

At The Preserve at Westfields, new construction (at right) is going next to already-built homes.

A large residential and retail project, Commonwealth Place at Westfields is being built along Newbrook Drive.

Artist’s rendition of the Bull Run Farm Brewery in Centreville.

With several projects in the works, developers are planning to build more homes, restaurants and shops here. All those things added to what Centreville and Chantilly already have to offer make this area even more special for its residents. Then there’s the traffic – but fixes are on the way for it, too. Here’s a look at just some of the things on the local horizon:

Fairfax County is building the Sully District Community Center on a 5-acre site at the intersection of Wall Road and Air and Space Museum Parkway in Chantilly. The roughly 34,000 square-foot building will serve as a multigenerational center for the surrounding communities, so it’s geared for residents of Chantilly, Centreville and Oak Hill.

It will also be the new and permanent home of the Sully Senior Center and will include a healthcare component, as well. The community center will offer a broad array of services, programs and activities for people of all ages and abilities. Estimated cost is more than $20 million, and the project is scheduled to be completed in 2022.

Planned are three multipurpose rooms for programs both day and evening, plus an arts-and-crafts room, game room, exercise room, offices, kitchen and pantry. The facility will also feature a gym with two basketball courts. There’ll be programs for youth after school and during the summer. And the center will provide a meeting place for groups and organizations, too.

Fairfax County approved a rezoning for that site and also amended its Comprehensive Plan for that area so that high-density, residential uses may be built there. Akridge owns the land and is building the apartment and retail components; Craftmark Homes and Van Metre are constructing the townhouses.

Included is an amenity area with walking paths, a pavilion/performing and gathering area, plus a lake that wasn’t previously accessible. Proffer highlights included almost $6 million in recreation improvements and more than $5.5 million in road improvements. Construction has been underway for quite some time, so many sections of homes are already completed, and residents have moved in.

The Field at Commonwealth

The Field at Commonwealth is along Westfields Boulevard in Chantilly, across Route 28 and just northeast of the Akridge site. This popular, new shopping center opened last year inside the Newbrook Drive loop road and is part of a commercial complex including shops and restaurants.

The Wegmans grocery store is already there and has been joined by a variety of restaurants, a yoga studio and health-oriented businesses. Now, workmen are busily building the Lazy Dog Cafe across from pizza place Mellow Mushroom. The new restaurant is a casual-dining concept that serves hand-crafted, American food highlighting seasonal ingredients.

Commonwealth Place at Westfields is a project of developer Regency Centers and involves a parcel of land across the street from the Chantilly Wegmans, along Newbrook Drive. An amended rezoning enables it to have both residential and retail uses.

The Winery at Bull Run has proved so successful that owner Jon Hickox now wants to operate a farm brewery. His property is adjacent to Manassas National Battlefield Park, off Route 29 in Centreville. He wants to build two, historic-looking and adjoining buildings meshing with the landscape. But his plan requires two, particular permits from the county.

Residents of the nearby Stonebridge Chase neighborhood don’t object to the brewery, but they are concerned about how the access road leading to it will affect their neighborhood. They’re also worried about the potentially large volume of traffic the winery could place onto Bull Run Post Office Road.

“We envision an authentic, farm brewery with beer using our own, homegrown hops, while not harming the beautiful mountain vistas,” said Hickox. He said some 80 percent of the beer would be made in an offsite, industrial area, with just some smaller-batch, specialty beers brewed onsite.

The matter goes before both the Fairfax County Planning Commission and Board of Zoning Appeals in September, before heading to the Board of Supervisors, which will have the final say.

Rush hour on Route 28 in Centreville can be pretty slow going. But a multimillion-dollar widening project should improve things considerably. It won’t become reality until 2023, but plans are well underway toward making that happen.

Route 28 will be widened from four lanes to six for about 2.3 miles from the bridge over Bull Run to the interchange at Route 29 at the Prince William/Fairfax County line. Besides adding more through lanes to Route 28, the project will provide additional lanes on side streets to improve traffic flow.

It will also improve intersection operations, upgrade existing traffic signals and improve bicycle and pedestrian crossings. In addition, new, 10-foot-wide, shared-use paths will be created on both sides of Route 28. This Fairfax County project is being done in cooperation with VDOT and the Northern Virginia Transportation Authority.

The whole shebang is estimated to cost $76,625,000 and, as of now, it’s completely funded from a variety of sources. The county hopes to have a contract signed with the design-builder by January-February of next year. And at the 60-percent plans stage, the design-builder will hold a public hearing before construction starts, to explain all the details to the community.

The goal is to reduce congestion, while improving safety, operations and access. The project will also add and improve 10-foot-wide, shared-use paths along both sides of Route 29 to provide better bicycle and pedestrian access to the trails at the Fairfax County Parkway/West Ox Road Interchange. Planned, as well, are crosswalk improvements at major intersections, with modified signals to accommodate them.

Estimated project cost is $85.9 million, with $19 million of that amount yet to be funded. Right-of-way acquisition – including meetings with individual property owners – is expected to begin in early 2020. Construction is anticipated to start in late 2022 and take approximately two-and-a-half years.