An evening of conversation with Broadway’s Baayork Lee. 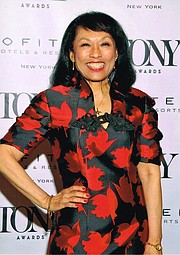 Baayork Lee; in conversation at Reston CenterStage on Feb. 9, 2019.

From her Broadway debut in “The King and I,” to being in the original company of George Balanchine’s “Nutcracker” to a featured role in the Tony Award winning “A Chorus Line,” Baayork Lee has performed in some of the most far-reaching musical productions of the past decades. In the D.C. area, Lee directed “Carmen Jones” at The Kennedy Center, was the resident choreographer for the Washington National Opera, and choreographed for DC’s renowned Arena Stage.

Baayork Lee will soon be at Reston’s CenterStage for an intimate evening chatting about her creative career, the state of Broadway today, and her intergenerational work with the National Asian Artists Project.

“Audiences will hopefully get to know me and my journey from being a kid with ambitions to where I am today,” said Lee. “I enjoy chatting about the theatre because it is still an intricate part of my life. The passion that I have for it I hope to continue to share with those who are interested.”

Asked about Broadway today, Lee indicated that when she started “shows like ‘The King and I,’ ‘South Pacific,’ ‘Fiddler on the Roof,’ and ‘West Side Story’ were on a larger scale and expensive to produce. Due to the very high cost, producers realized they could no longer support them. Then ‘A Chorus Line’ changed all of that. We enabled producers to afford productions through workshops, instead of going out of town and by giving smaller, but high quality production. Shows like “Normal Heart,” “Dear Evan Hansen,” and “Spring Awakening” are great examples of this currently.

Lee added that for theatre; “change is important because as generations get introduced to the theatre, we need them to be able to identify with the subject matter as introductions to the theatre for young people.”

Asked about the importance of diversity in theatre casting, Lee said that “When people are able to see diversity on stage, they will be able to relate to the characters more; the experience becomes more personal to them. I believe it has taken so long because it takes a village to make a show, so we have to change the minds of the villagers; the Producers, Directors, Choreographers, Casting Agents, Writers, Composers, and so forth.”

For those contemplating a theatrical career, Lee added this: “The most important thing is to be focused in what you want, follow your dreams, and never give up.”