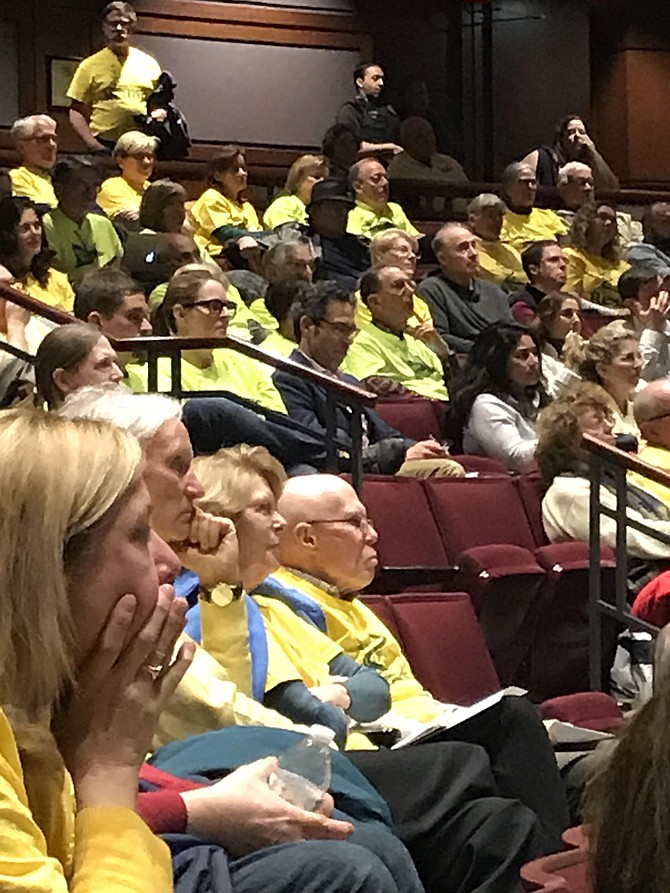 Many audience members at the Public Hearing for the Planning Commission Meeting Jan. 23, on Zoning Ordinance Amendment wear yellow shirts to show their unified opposition to the proposed amendment. Photo by Mercia Hobson.

As the clock ticked toward midnight after the public hearing at the Fairfax Planning Commission Meeting Jan. 23, on Zoning Ordinance Amendment - Article 6 - Density Provisions for the Reston PRC District (Hunter Mill District), a reported 29 speakers, members of citizen action groups opposing the amendment, and others representing developers advocating for the amendment, spoke for nearly five hours.

James R. Hart, Commissioner At-Large, made reference to four years ago. "We left ourselves a real mess," he said. Hart said there was a consensus at that time the future development of Reston would mainly be concentrated around the Transit Station Areas. "It would be vertical rather than horizontal…designed in such a way to be compatible with Mr. Simon's principles…and that we would leave the rest of Reston, basically, the way it was. We were not increasing anything other than the Transit Station Areas."

Commissioner Hart referenced the village centers as a leftover from what Reston founder Robert Simon wanted at the inception of Reston but didn’t quite happen, with the exception possibly of Lake Anne.

"It wasn’t something that was bumped up in this process. It was just something that just wasn’t torn down in that process… We left it the way it was,” Hart said. "We had that consensus, and I think it’s faded away, and I’d still like to hope that there’s a way to get things back together," he said.

Hart expressed the approach had to be mindful of Simon's principles and the continued involvement of the community. "I think we can get there," he said.

Hart introduced a motion to "defer the decision.”

Chairman Peter F. Murphy, (Springfield) said, "All those in favor of the motion to defer decision only on the proposed Zoning Ordinance Amendment, Article 6, Density Provisions for the Reston PRC District, to a date certain of Feb. 13, with the record remaining open for comments, say aye."

The record showed the motion carried by a vote of 12-0.