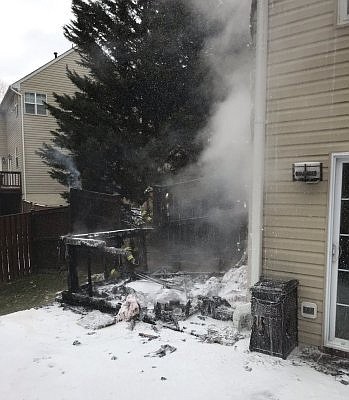 Damages as a result of the fire were approximately $60,000. Photo courtesy of Fairfax County Fire & Rescue Department

On Friday, Feb. 1, at 2:02 p.m., units were dispatched for a reported house fire in the 7800 block of Thornfield Court in the Fairfax Station area of Fairfax County.

Units arrived on the scene of a two-story, single-family home with fire showing on the exterior of one side and extending into the attic. Crews quickly extinguished the fire. There was minor extension into the attic. There were no firefighter or civilian injuries reported.

There were two occupants home at the time of the fire. The fire was discovered by a neighbor who alerted the occupants and called 9-1-1. Smoke alarms were present but did not sound due to the location of the fire. Both occupants safely evacuated prior to fire department arrival.

Fire Investigators determined that the fire was accidental in nature and started on the exterior of the house. The fire was caused by a malfunctioning motor on a hot tub.

Four occupants were displaced because of the fire. Red Cross assistance was offered and declined. Damages as a result of the fire were approximately $60,000.