Holy Child Adapts ‘Mamma Mia’ for All Audiences in Potomac

Opening performance will be sensory-friendly for people with special needs. 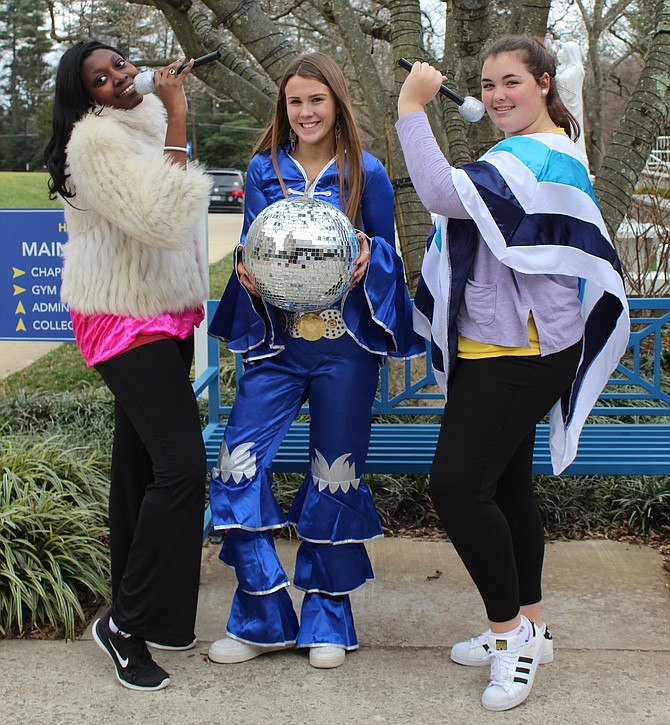 Students rehearse “Mamma Mia” at The Connelly School of the Holy Child in Potomac for opening performance on Feb. 23. Photo contributed

Students at The Connelly School of the Holy Child in Potomac will spend the next two weekends singing and dancing to the tunes of ABBA when they present “Mamma Mia” as their annual upper school musical.

The opening performance on Feb. 23 will again be sensory-friendly, the fourth year the school has opened the show to members of the autistic and special needs community.

“We always have about 50 or so people attend [the special performance] and the show grows bigger every year,” Caitlin Chalke, director of communications at the school wrote in an email. “Those that come with their family to enjoy the show are extremely appreciative of this offering.”

The sensory-friendly play has a lower sound level, a brighter auditorium with lights on but dimmed, a shortened running time, a quiet room for patrons who need a break, and the audience is permitted to talk, walk around, dance, and come and go from the auditorium, Chalke wrote.

“It’s a little different, but worth the effort,” freshman Kelsey Kley, who has the part of Lisa, one of the bride’s friends in the show, said. “It’s really nice to see all the kids’ smiling faces.”

Despite the original play’s somewhat risqué subject matter, director Elsbeth Fager said “Mamma Mia” works for the students because they are using a newer version of the script created for young performers.

“This summer [they] came out with an amateur version for younger performers,” Fager said, “The script is a little different.”

Based on the songs of ABBA, a Swedish pop group of the 1970s, long before holy Child students and many of their parents were born, “Mamma Mia” tells the story of a young woman getting married at her mother’s Greek Taverna.

The bride longs to have her father walk her down the aisle at the wedding but she does not know who her father is. Thus, begins the intrigue of learning his identity.

All this is told using songs from the ABBA repertoire.

“We found it to be a great celebration of love, laughter, family and friendship,” Fager said.

Holy Child is a small school for girls in grades 6-12, but that is one of its strengths according to Chalke.

“What’s so great about Holy Child is, since we are a small school [325 students] we encourage all the students to participate,” she said.

The show, including sets and technology, is student run, supported by school faculty, Fager said.

The Feb. 23 performance will be at 11 a.m., with face painting, games, and treats for families attending beginning at 10 a.m. Admission is free for this special performance.

A children’s disco party room with face painting, popcorn, games, and photo booth will open one hour prior to each performance.

Tickets are $10 for adults and $5 for students. The may be purchased at www.holychild.org/mamma-mia/.