Performance Bikes on Frontier Drive is Closing the Doors
Votes

Performance Bikes on Frontier Drive is Closing the Doors

Options for bike buying and service gets limited in Springfield. 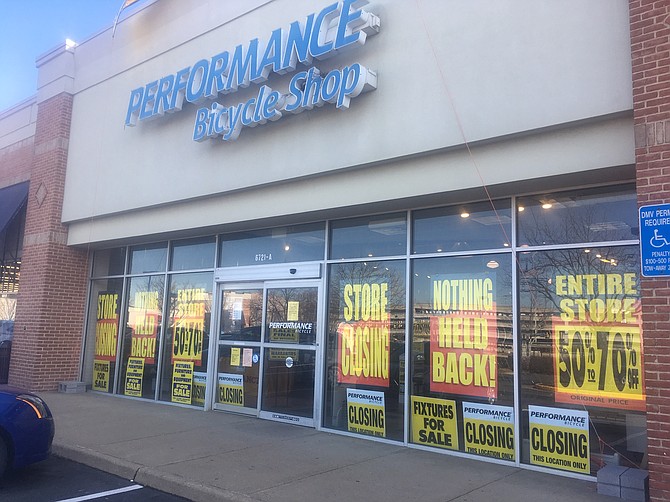 The store closing banner over Performance Bikes on Frontier Drive in Springfield, flopped in the wind making it hard to read but once in front of the store, it was clear the store was closing.

Emily and Dave Webster walked out with a new pair of biking gloves and a seat they got for bargain prices. “Very cheap,” Dave Webster said. They’d seen other big box stores on the same strip close over the last couple of years, some facing the internet shopping competition, but a bike store seemed a little distanced from that retail obstacle. The Performance location was good, near the Metro station and connected with the Springfield-Franconia Parkway and bike trail, and a good parking lot for test riding a bike before buying. That’s one advantage a brick and mortar bike store has over the internet.

Up front, it wasn’t clear why the bike store was closing, but Emily Webster wasn’t happy. She had bought her family a few bikes there and liked the location. “It’s not like this is really that inconvenient,” she said of the location. “Times are changing and I don’t like it,” she added.

On the Performance website, it said the company was filing Chapter 11 bankruptcy protection. “Currently all Performance Bicycle Stores are holding Store Closing Sales,” the information stated.

Ordering a bicycle on the internet may be the wave of the future, but if it doesn’t fit the rider, returning it would be more than just showing a receipt at the counter. Shipping a bicycle back is a process and the inside of a bicycle shop is an experience for the cyclist. There are all kinds of bikes, outfits, pumps, shoes and usually a shop in the back to fix bikes. Shops like this are “a real asset to the biking community,” said Colin Browne, the communications director at the Washington Area Bicycle Association. “It’s always a bummer to see the brick and mortar bike shop close,” he added.

An employee inside said the actual last day will be in a few weeks, which puts the actual closing date in late February or early March.

For the two streets on either side of Springfield Town Center, a few stores have closed over time. Next to Performance was a Party City store that moved to the other side of the Town Center, and Borders books a few doors down closed a few years ago and is now Modell’s Sporting Goods. Over where Party City’s new location is, the HH Gregg store closed and was subdivided into two stores. One will be Party City and the other will be Marshalls, a clothing variety store. It is not clear what is going in the old Party City or the Performance location. Down the parkway a few miles, there is the shell of a Toys R Us that closed a while ago, and so far, there are no plans for that location.