Longer lasting hot patches will be made in the field. 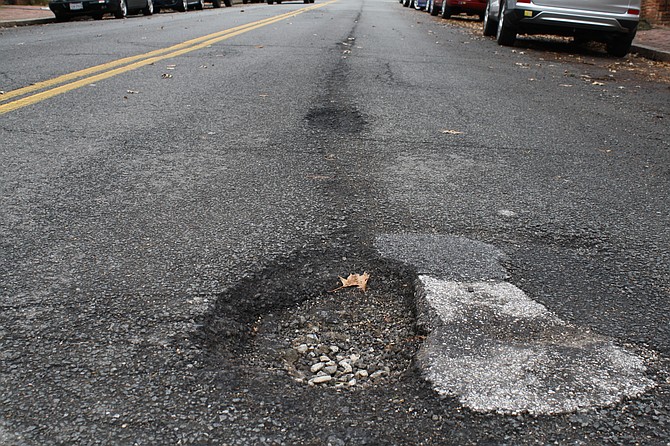 Potholes like this one on Duke Street can wreak havoc on the car. Photo by Mike Salmon.

On Duke Street near the intersection with Pitt Street in Old Town, there is a pothole about the size of the turkey pan with a couple of old patches

on the outer edges, but it’s still big enough to catch a driver’s attention when the front wheel hits it.

There are several just like it up and down Duke Street as the freeze and thaw cycle is kicking in for this year’s pothole season, but this year the city has an “asphalt recycling machine,” which provides a better option than a cold patch.

“We can patch potholes permanently in the winter,” said Jeff Duval, the city’s director of Transportation and Environmental Services. “Now we’re going out there one time to repair the pothole,” he added.

During the colder weather, cold patches aren’t as good as a fully mixed hot patch which are only mixed at the hot plant which is open in the spring. Normally the city has to wait for better weather to give the potholes a good hot asphalt patch, but with this new patch maker, hot patches can be made on-site and will last longer.

The asphalt recycling machine cost the city $86,425 which includes a three-year maintenance plan, said city spokesperson Sarah Godfrey. The city calculates the cost per pothole goes from roughly $210 per patch, to $60 per patch with the new machine since it is a more permanent fix "resulting in significant annual savings," Godfrey said.

Potholes are primarily caused by freezing and thawing cycles where water expands and contracts in small cracks in the asphalt. “They are an unfortunate part of the annual changing of seasons in every city, and in Alexandria we repair about 5,000 potholes each year during our annual spring blitz,” said Craig Fifer, director, Office of Communications and Public Information. Fifer recommends using the city’s online pothole reporting system as well. According to the city’s “potholes by numbers” graphic, February is the big month for repairing the potholes. In 2015 for example, 5,949 potholes were repaired, but out of that figure, only 963 service requests were turned in through the city’s online reporting system. In 2016, 2,067 potholes were repaired during the month of February. These were cold patches though, and the new hot-patch machine should increase the numbers.

The city has 560 lane miles of roads to repair and pave. Since the City of Alexandria is primarily responsible for the city roads, there is some money in the budget for this, but the city also looks to the Virginia Department of Transportation (VDOT) State Revenue Sharing Program as well to leverage grant opportunities as they become available, according to the City of Alexandria. In July 2018, VDOT announced that the city will be awarded an additional $1,000,000 through the FY 2019 VDOT Primary Extensions Grant to pave sections of Duke Street and will allow for additional paving and related sidewalk improvements to be completed this fiscal year.