Opinion: Commentary: The Year Ahead in the Dranesville District
Votes

Opinion: Commentary: The Year Ahead in the Dranesville District 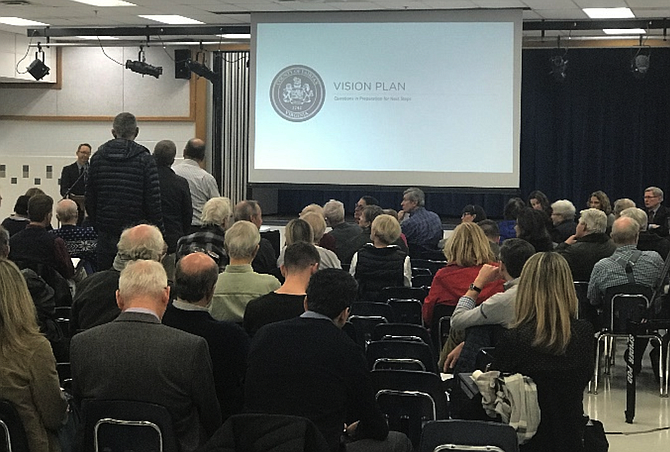 Over the last year, hundreds of residents and stakeholders have met at workshops and meetings organized by the county and its consultant to create a vision plan for downtown McLean. Photo contributed

Each year, there are many projects, studies, and developments in the works in the Dranesville District. It is exciting to look back each year at what has been accomplished and to look forward to what is ahead. It is my honor to serve as your representative to the Fairfax County Board of Supervisors and share updates and information about what’s going on in the area. I wish you all the best in 2019.

The area designated as the McLean Community Business Center (CBC), more commonly known as downtown McLean, has long been planned to serve as a focal point and gathering place for McLean area residents, with a mix of residential and community-serving commercial uses. Over the last year, hundreds of residents and stakeholders have met at workshops and meetings organized by the County and its consultant to create a vision plan for downtown McLean.

While downtown McLean has seen some revitalization, such as undergrounding of utilities, landscape and streetscape improvements, and construction of several development projects, it has been 20 years since the last comprehensive review of the downtown’s land use plan. A revised Comprehensive Plan, based on community input and priorities, will help stimulate the revitalization that has long been desired for downtown McLean.

On Dec. 17, a final vision plan was presented to the community. The proposed vision plan includes three zones; center, general, and edge, with the highest density in the center and lower densities in the edge, closer to surrounding neighborhoods. The plan aims to revitalize McLean’s commercial core by prioritizing open space, a walkable shopping and dining district, and a diverse mix of housing.

In early 2019, a task force comprising residents and representatives of local citizen groups will begin working with County staff to translate the community's vision into recommendations for a revised Comprehensive Plan for the CBC. The plan they recommend will then go through another community vetting process that will include public hearings at the Planning Commission and before the Board of Supervisors. The community has been very engaged in this process, and I look forward to continuing these discussions.

Work to renovate and expand the McLean Community Center wrapped up in late 2018 and a ribbon cutting was held on Dec. 5. The project included renovation of approximately 33,000 existing square feet and the addition of 7,700 square feet to the facility. Two additional multi-purpose rooms, an enclosed outdoor courtyard with seating and landscaping, and refurbished meeting rooms were included in the project. In addition, the renovation upgraded the technology throughout the building and improved and enhanced the storm water management system while bringing the MCC into compliance with current ADA and building code regulations. The parking lot was regraded and resurfaced, additional parking spaces were added, and walkway lighting was improved. Beginning in early 2019, residents will be able to take full advantage of this new and improved community resource.

In fall 2018, The Fallstead opened. It is the first of two buildings included as part of the Lewinsville Redevelopment Project in McLean. This building consists of 80 independent affordable living apartments for low-income seniors. The second building, which is still under construction, will house an expanded senior center, an adult day care center and two children’s day care centers, and is expected to open in spring 2019. The Lewinsville Project is the result of a private-public partnership between the County and Wesley-Hamel Lewinsville LLC.

On Dec. 15, one travel lane in each direction opened on the Jones Branch Connector. This project, which is being completed by the Virginia Department of Transportation in cooperation with Fairfax County, provides an important new link to Route 123 over the Capital Beltway (I-495) for commuters and visitors to Tysons. The link will improve local traffic and access for drivers, in addition to offering a vital option for area bicyclists and pedestrians. By providing an alternate route across the Beltway and linking the Tysons East and Central areas, the Connector is expected to relieve traffic along Route 123, at the I-495 interchange, and at other congested intersections. When completed in fall 2019, the Jones Branch Connector will have two travel lanes and on-street bike lanes in each direction; 8- to 12-foot-wide lighted sidewalks, landscaping and other streetscape amenities; and a wide, raised median to accommodate future transit options, such as a circulator-bus route.

Riverbend Park located along the Potomac River in Great Falls, is known for its natural, educational, and cultural features. Many County school children visit the park annually to learn from naturalists who make science and history fun and engaging.

In accordance with the Riverbend Park Master Plan, the Park Authority is constructing an Outdoor Education Classroom/Picnic Shelter to support the park's educational mission. The new facility will enhance the programs Riverbend currently offers. Construction is nearly completed. The facility will be available to the public in spring 2019.

In 2011, the Virginia General Assembly gave local jurisdictions the authority to develop resident curator programs. After evaluating the costs and benefits of such a program, the Board of Supervisors adopted its Resident Curator Program Ordinance in 2014. The ordinance allows people to live in unused, publicly owned historic properties in exchange for rehabbing them. The Turner Farmhouse has occupied a prominent place along the historic Georgetown Pike since 1905, and its builder, Mark Turner, was one of Great Falls' most prominent citizens. The Turner Farmhouse and associated buildings were a great candidate for a resident curator.

In early 2017, the Park Authority was ready to accept applications for the Turner Farmhouse. Of the three applications, Sarah Kirk's quickly stood out. The review of Ms. Kirk's application was thorough and included public meetings, and her proposal received overwhelming support. In July, the Park Authority Board approved the staff recommendation of moving Sarah Kirk's application forward to the leasing process, and in October, the Board of Supervisors authorized the execution of a lease between the County and Ms. Kirk.

Under the care of the lease, Ms. Kirk, as principal of the Turner Farm Foundation will rehabilitate the property. It will serve as a residence for the Kirk family, with its pony farm on the leased property. It will also repair the property's milk house, restore and preserve its historic corn crib, and pending approval of a special exception, renovate an existing garage to serve as a bereavement retreat center for youth who have lost a parent or sibling.

The Sugarland Run Stream Valley Trail is part of the countywide trail system, running from Sugarland Road to the Town of Herndon line.

The Fairfax County Park Authority is milling and repaving approximately 12,000 linear feet of trail in Sugarland Run Stream Valley Park in Herndon. Both the northern section from Wiehle Avenue to Dranesville Road and the southern section from the existing bridge near Kingstream Circle to Wiehle Avenue will be paved. Culverts along the trail were replaced before paving could begin. The project is expected to be completed in spring 2019.

The County continues to see significant commercial and residential development near the Metro stations along the Silver Line. This is welcome news given the investment the County has made in extending the Silver Line and is a testament to how attractive Fairfax County is to employers and jobseekers. In December, the Board approved changes to the Comprehensive Plan to add a new rail transit option for the area immediately north of Innovation Station in Herndon. This change brings the development potential at Innovation Center in-line with its neighboring stations. A task force of Herndon-area residents focused on Plan guidance to address opportunities for amenities and to ensure public infrastructure will keep pace with new development, including roads, pedestrian/bike facilities, public facilities, and open spaces. In addition, the Plan reaffirms the commitment for a bridge across the Toll Road between Sunrise Valley Drive and Innovation Avenue.

On the south side of the Toll Road, a strong residential development pattern is emerging due in large part to the conversion of outdated commercial uses. This change will provide much needed housing in the Herndon area, but investment in providing infrastructure in the form of public facilities and community uses for these new residents is needed. Over the past three years, I have worked with the development community to secure more than $3M in funding for parks and have negotiated additional commitments for school needs.

Dulles Station Park, located at 13707 Sayward Boulevard, is a great example of the County’s efforts to guarantee that we are not just creating housing developments but are also creating communities. The park was constructed as part of a proffer associated with the Greystar’s Station on Silver apartments near Innovation Station. The 2.6-acre park, which includes playgrounds for preschoolers and elementary-aged children, a seating area, a fitness area, a walking trail, a multi-use court, and a dog park with a shade pavilion, was completed in fall 2017 and serves as an amazing public gathering space.