The Year Ahead in the Dranesville District
Votes

The Year Ahead in the Dranesville District 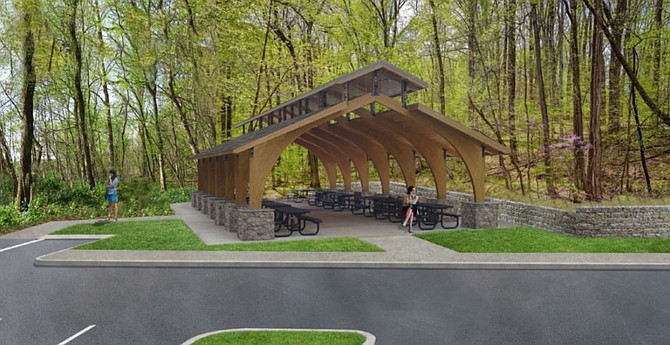 Rendering of the independent living facility.

Riverbend Park in Great Falls, the only Fairfax County park located along the Potomac River, is known for its natural, educational, and cultural features. Many County school children visit the park annually to learn from naturalists who make science and history fun and engaging.

In accordance with the Riverbend Park Master Plan, the Park Authority is constructing an Outdoor Education Classroom/Picnic Shelter to support the park's educational mission. The new facility will enhance the programs Riverbend currently offers, which range from bird watching to canoeing. Construction is underway and the project will be completed this fall.

Understanding the importance of the County’s investment in the Metrorail Silver Line, the Fairfax County Board of Supervisors directed Fairfax County Department of Transportation (FCDOT) staff to initiate the Herndon Metrorail Stations Access Management Study (HMSAMS) in 2012. The purpose of the study was to engage the public to identify and prioritize necessary bicycle and pedestrian facility projects to improve access to the future Herndon and Innovation Center Metrorail Stations.

The County’s current six-year transportation program includes approximately $21 million dedicated to HMSAMS projects. Approximately half of that money has been programmed to bicycle and pedestrian projects. Currently in design is a project that will construct approximately 300 feet of sidewalk from Innovation Station to Dulles Green Boulevard. Another project that is under design will install almost 650 feet of sidewalk from the Arrowbrook Centre to Sunrise Valley Drive. Construction on both of these projects is expected to begin in fall 2019 and be completed in spring 2020. I look forward to continue working with the Town of Herndon and FCDOT staff on these and other HMSAMS projects.

The area designated as the McLean Community Business Center (CBC) is more commonly known as “downtown McLean.” The CBC has long been planned to include a mix of residential and community-serving commercial uses and to serve as a focal point and gathering place for McLean area residents.

While there has been significant support for revitalizing downtown McLean, provisions of the current Comprehensive Plan for the CBC have not helped stimulate those revitalization efforts. That is why I asked the Board of Supervisors to direct County staff to initiate a community-led review of the Comprehensive Plan for the McLean CBC. That effort began earlier this year and has included three well-attended, consultant-led community workshops. The consultant is currently analyzing the input received at those workshops and will convert that data into a draft vision statement for further consideration by the community.

There will be two community meetings held in the fall to help finalize the vision statement. Once consensus is reached on the community’s vision for the CBC, a task force composed of representatives from the McLean Citizens Association, McLean Revitalization Corporation, McLean Planning Committee and the McLean Chamber of Commerce as well as several other McLean area residents will work with County staff to translate the community's vision into recommendations for a revised Comprehensive Plan for the CBC. The plan they recommend will then go through another community vetting process that will include public hearings at the Planning Commission and before the Board of Supervisors. We anticipate that, ultimately, the Board will adopt a revised Comprehensive Plan for downtown McLean that will help stimulate the revitalization that has long been desired.

This year, we will see the grand opening of the first of two buildings in the Lewinsville Redevelopment Project in McLean. That building will consist of 80 independent affordable living apartments for low-income seniors. The second building, which is also under construction, will house an expanded senior center, an adult day care center and two children’s day care centers, and is expected to open in early 2019. The Lewinsville Project is a private-public partnership between the County and Wesley-Hamel Lewinsville LLC.

Early next year, residents will be welcomed back to a renovated and expanded McLean Community Center. The project involves renovating approximately 33,000 existing square feet and adding 7,700 square feet to the facility. The project includes two additional multi-purpose rooms, an enclosed outdoor courtyard with seating and landscaping, refurbished meeting rooms, and a more modern look with new wall, ceiling, and floor treatments. The renovation will also upgrade the technology throughout the building and improve and enhance the storm water management system while bringing the MCC into compliance with current ADA and building code regulations. The parking lot will be regraded and resurfaced; additional parking spaces will be added, and walkway lighting will be improved. The $8 million renovation project is fully funded through the MCC’s capital reserves. The MCC building has been closed since April 2017; however, programs and special events have continued to be held in various locations around town.

Several pedestrian and road projects are scheduled to start or be completed in 2018, including the following:

During the past year and a half, I have worked with other elected officials and staff from VDOT and Fairfax County to address resident concerns regarding congestion and cut-through traffic caused by the lack of sufficient capacity on the American Legion Bridge and the Beltway on the Maryland side of that bridge. On the north side of Georgetown Pike between Balls Hill Road and the Beltway ramp, VDOT constructed a pull-off area so that the police can safely enforce traffic violations in the area. Recently, two streetlights were installed to provide lighting for police enforcement. In addition, I formed a community group, the McLean Traffic Advisory Group, to consider traffic concerns in the area, make recommendations, and share updates with their neighbors. This group has met several times since the beginning of the year and is tasked with reviewing options through a regional lens.

Recently, VDOT proposed a pilot project to close the northbound entrance to the Beltway from Georgetown Pike from 1 p.m. to 7 p.m. on weekdays. A community meeting was held in early August and another will be held this fall. VDOT is seeking input from the community to determine if the pilot project will be implemented. I look forward to continuing to work with the community to address these very serious traffic concerns.