Daytime and overnight retreats on a portion of Turner Farm Park 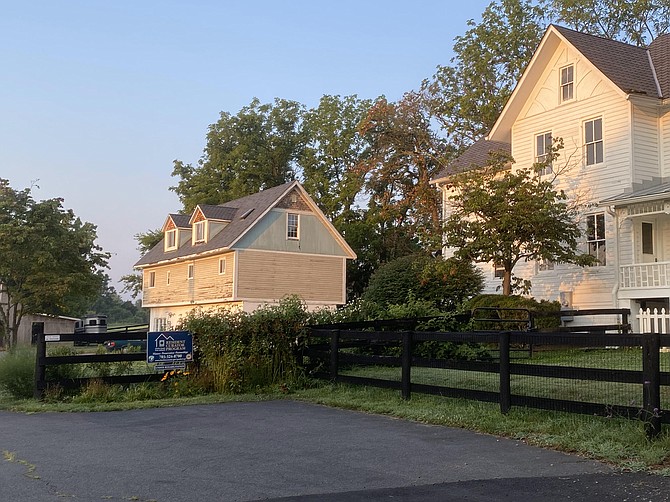 (From left) The Turner Farm garage is located behind the main farmhouse. It will be used as a public benefit association facility providing meeting space for grief and bereavement programs. Photo by Mercia Hobson.

In her staff presentation on the special exception, Tracey Strunk, Zoning Evaluation Division, Department of Planning and Development said Fairfax County Park Authority owns the property for its Resident Curator Program. It is designed to preserve and rehabilitate underutilized publicly-owned historic properties through long-term lease agreements with private entities or persons. Applicant Turner Farm Foundation leases the property. The applicant intends to provide meeting space for groups and individuals for programming related to grief and bereavement support and operate primarily out of the existing garage structure. Access to the property would be off Georgetown Pike.

“These would be daytime events during the week with overnight retreats on some weekends,” Strunk said. There would not be any changes to the existing farmhouse or vegetation along Georgetown Pike, nor would additional screening be necessary alongside the Pike.

The Retreat Center would operate Monday through Friday, 9 a.m. through 5 p.m., with weekend events running from Friday at 3 p.m through Sunday at 5 p.m. The applicant proposed new exterior stairs and a ramp to the garage to improve accessibility. Additionally, a new deck and elevator were shown on the SE Plat along the rear elevation of the garage, along with upgrades to the septic system. The maximum number of guests for Retreat Events would be ten. A caretaker and a maximum of two additional staff members would be permitted during a Retreat Event.

DURING THE PUBLIC HEARING, Kirk said that they had a tragedy in their family eight years ago. “Our daughter Becky Love died by suicide, and death became really real to my family and me…But I realized just how difficult a process that can be.” Kirk said they found a lack of facilities to help people in Northern Virginia and the Great Falls area.

Jennifer Falcone spoke on behalf of the Great Falls Citizens Association, in her capacity as chair of the Land Use and Zoning Committee. “We have closely monitored the progress of this special exception application and have actively engaged with the community, the neighbors who surround the Turner Park Farm to ensure their expressed concerns related to the nature of the retreat program could be examined, and its objectives and terms of service fulfilled.”

Falcone acknowledged that the initial application provoked several concerns among neighbors. Ten listening sessions, community workshops, and discussions led the focus back to the program’s original intent. That was to provide “grief and bereavement support due to the death of a parent, sibling or primary caregiver, family member, spouse or child, or significant person.”

Consequently, GFCA believed, Falcone said that there was a “balancing of interests.” The applicant volunteered to publish a separate calendar identifying Resident Curator events and update social media to the retreat uses. Lighting concerns associated with the retreat house abated; lights would not interfere with the adjacent Observatory Park.

Falcone said the GFCA wished to stress the importance of maintaining community oversight, engagement, support, as well as “oversight by the appropriate Fairfax County organizations to ensure the initial and continued success of the Resident Curatorship and the proposed Retreat House.”

“GFCA recognizes the challenges in bringing a program like this into fruition and that to be successful, it requires the support of the community. We believe that this program will fulfill an important need in offering support to a target group who experienced loss by providing services and a welcoming environment,” Falcone said.

Tom Hixon is President of the Foxvale Farm Homeowners’ Association, a community at the southwest corner of Georgetown Pike and Springvale Road in Great Falls. Hixon said he was happy to see mental health professionals help develop the programs and check in to see how they were doing. There had been a question of liability since the Park Authority owned the property. He was glad the program would be run in such a way as to minimize problems.

SUPERVISOR John Foust (D-Dranesville) lauded Kirk for her vision of a facility to help people in the grieving process, and for community members helping to work out the details. “Everyone was supportive. It was just one of the nicest things that I’ve been associated with that we’ve done in the Dranesville District since I’ve been on the board,” Foust said.