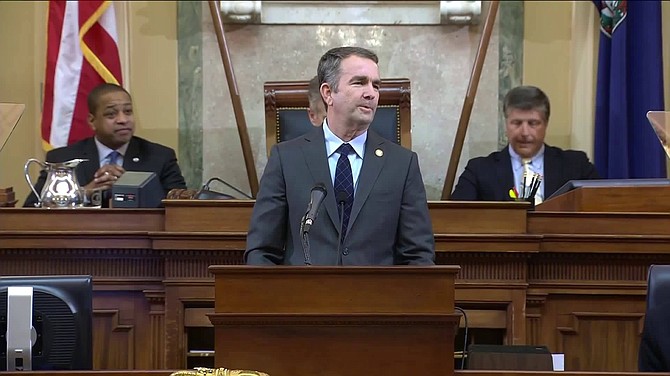 Gov. Ralph Northam gives his second State of the Commonwealth Speech before 140 members of the 2019 General Assembly, on Jan. 9. Livestream

RICHMOND, Va. – From attracting high-tech businesses to improving access to health care services, Gov. Ralph Northam’s State of the Commonwealth speech touted wins and legislative proposals that both parties celebrated, though Republicans blasted his ideas on taxes and budget spending.

The 2019 General Assembly session marks Northam’s second year in office and the 400th anniversary of the House of Burgesses, the first democratically elected legislative body in the British American colonies. His speech didn’t shy away from acknowledging the state’s “long and complex history” while connecting several of the session’s proposals to health and safety.

“In 2017, 1,028 Virginians died of gun-related causes,” Northam told a joint meeting of the General Assembly at the end of the first day of the 2019 legislative session. “That’s more deaths due to gun violence than the 956 Virginians who died due to vehicle accidents.”

“It is clear that the commonwealth is coming into 2019 in a strong position. Our economy is thriving, we are attracting major businesses and job creators like Amazon, and the Medicaid expansion we passed last year will boost state revenues and provide hundreds of thousands of Virginians with access to healthcare,” House Democratic Leader Eileen Filler-Corn and Caucus Chair Charniele Herring, said in a joint statement.

“Republicans are committed to stopping Governor Northam’s tax hike on the middle class,” Thomas said. “Our tax reform plan will return the tax windfall resulting from the federal tax cuts along to taxpayers, while providing targeted tax relief to middle- and low-income Virginians and protecting our coveted AAA bond rating.”

The Democratic governor called on the General Assembly to approve an “extreme risk law” -- a legal way for law enforcement to temporarily remove firearms from someone who has shown dangerous behavior or who poses a risk to themselves or others. This idea has passed Republican-led legislatures in other states and been signed by Republican governors, such as Massachusetts Gov. Charlie Baker and Vermont Gov. Phil Scott.

In his response to the speech, Thomas, a father of eight, said improving the safety of public schools is more important than hashing out possible firearm regulations.

“Our goal is to employ every means available to keep dangerous individuals out of our schools,” he said.

Northam addressed criminal justice reform. For the third year in a row, Virginia has had the nation’s lowest prison recidivism rate, and Northam said he hopes to maintain that record.

He also plans to end the practice of suspending driver’s licenses over failure to pay court costs, fees, and non-driving offenses. “When we take away people’s driver’s licenses, we make it harder for them to get to work, and thus make it even more difficult for them to pay their court costs,” Northam said. “We shouldn’t be punishing people for being poor.”

Moreover, Northam called for making simple possession a civil penalty to ease overcrowding in jails and prisons. Current law imposes a maximum of 30 days in jail for a first offense of marijuana possession.

In his speech, Northam celebrated a budget he had signed in May that expanded Medicaid coverage to 400,000 Virginians.

IN A SPEECH that included the word “together” 32 times, the governor concluded his address by encouraging unity among members of the General Assembly.

“I hope that as we go through the next 46 days together, we give consideration to each other, and to our ideas. It can be tempting to retreat to our corners and shout at each other,” Northam said. “But I believe we all have that internal moral compass, the one that guides us toward the right thing to do. I hope we all follow it this session.”

Republican and Democratic lawmakers will consider more than 2,000 bills between now and their scheduled adjournment, Feb. 23.