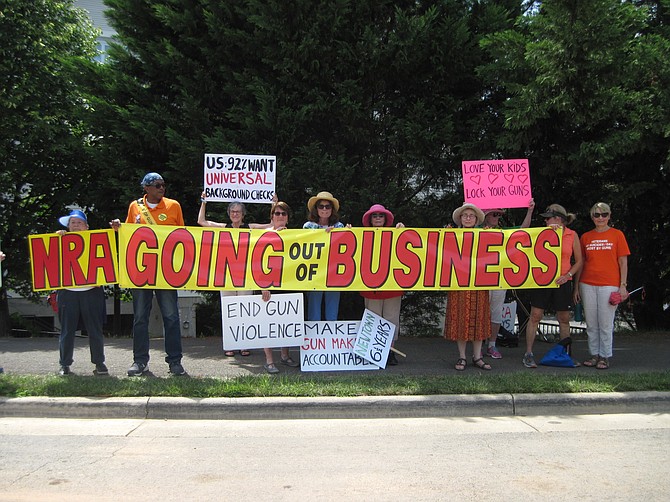 Grassroots activists hold a going out of business banner on the sidewalk across the road from the National Rifle Association in Fairfax during the July 14 protest against gun violence. Photo courtesy Karen Higa 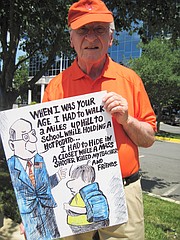 In spite of the failed July 9 special session of the Virginia General Assembly, Del. Kenneth “Ken” R. Plum (D-36) of Reston reaffirms his commitment to gun violence prevention on a hot summer day July 14 at a monthly protest in front of the National Rifle Association. 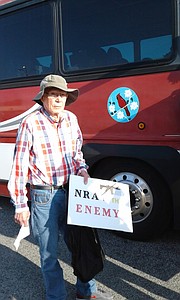 Richmond or Bust: Early on a Tuesday morning at a commuter parking lot in Woodbridge, Springfield resident Earle Mitchell waits his turn to board one of three motor coaches chartered by Brady United Against Gun Violence — on the way to Richmond July 9 for a “Votes and Laws” rally before noon at the state Capitol. They urged Commonwealth lawmakers to pass “sensible” firearm safety laws designed to prevent future deaths from gun violence before the start of a Virginia General Assembly special session that ended as quickly as it started. Mitchell started volunteering for gun violence prevention causes more than six years ago, when 20 school children and six adults were fatally shot Dec. 14, 2012 at the Sandy Hook Elementary School in Newtown, Conn. Mitchell said he served 28 years for the U.S. Navy and worked as a defense contractor. The 82-year-old activist says he supports universal background checks and believes “Virginians want more gun control.” Before boarding the Brady bus, Mitchell affirmed — no matter the outcome in Richmond — he would continue writing letters to lawmakers and newspaper editors, plus hand-written postcards urging folks to vote a straight ticket for the Democratic Party in November.

On July 14, more than 75 concerned people who oppose gun violence in Fairfax turned out to protest at the National Rifle Association. More motivation came from the July 9 failed special session of the Virginia General Assembly, when Republican lawmakers adjourned in record time without considering any proposed legislation.

Passing motorists heading to and from Oakton on a Sunday afternoon beep their car horns and give thumbs-up gestures in support of the protesters, who line the sidewalk at 11250 Waples Mill Road on a hot summer day July 14 — which marks their 79th consecutive vigil for the 20 school children and six adults fatally shot Dec. 14, 2012 at the Sandy Hook Elementary School in Newtown, Conn.

The anti-gun violence activists are used to having their firearm safety bills shot down in committee soon after the Virginia General Assembly regular session starts each January.

A week later, Kris Gregory of Falls Church said the most important fact to concerned citizens like herself was every delegate and state senator in the Virginia General Assembly had to vote to adjourn. It was a party-line vote to end the special session July 9 and the Democrats were outnumbered by the Republicans.

“It’s such a cowardly way to do it,” points out Plum, who is the longest serving member of the Virginia House of Delegates.

Gregory noted at the NRA protest she and more than 500 activists of the gun violence prevention movement statewide were in Richmond July 9 to get a message out to elected officials, “not to provoke the Second Amendment advocates.”

She and other protesters learned about the outcome of the special session on the bus ride home through text message from Brady staffers, who stayed in Richmond.

“An average of three Virginians die each day due to gun violence,” Northam said. “That means hundreds of Virginians may die between today and Nov. 18, the next day the legislature plans to work.”

According to the state government website, lawmakers agreed to meet again after the Nov. 5 General Election. Gregory makes it clear she and other activists are working to elect “gun violence prevention champions here in Virginia” on Nov. 5. They are united in heeding a call Gov. Northam has made to Commonwealth voters for more than a year: “If you can’t change their hearts, change their seats.”