A centennial, and going strong. 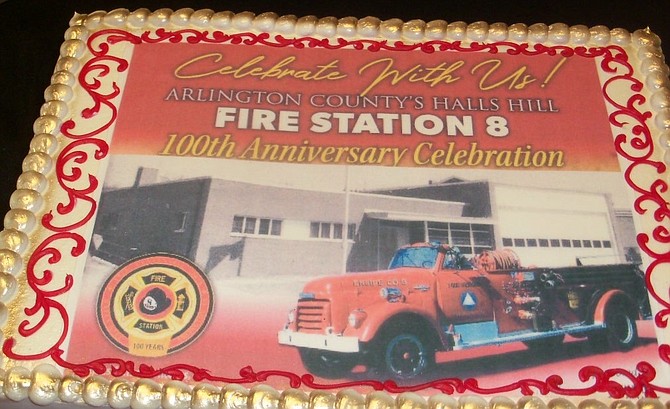 Boots on right belong to the first African American fire captain in Arlington: Hartman Reed. Those on left belong to his son, Donald, who also achieved rank of captain. 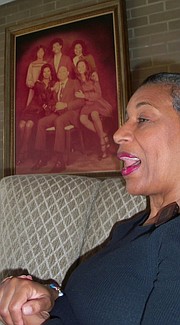 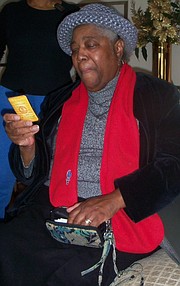 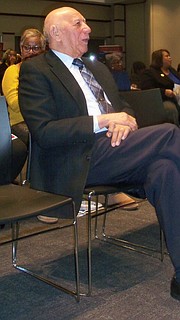 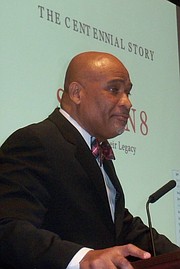 This could be a story, with faded photographs, of firehouses near the intersection of Lee Highway and North Culpeper Street. But it isn’t.

It also could be a story of firetrucks and other wheeled vehicles beginning with a cart pulled by the firefighters, again with old photographs. But it isn’t.

It is a story of intangibles worth more than all the firehouses and all the rolling equipment put together. Many words could capture the heart of Engine Company 8, including responsibility; character; commitment; service; trust; perseverance; and dignity in the face of indignity. To embrace such concepts for 100 years itself is remarkable. Beginning toward the end of the Civil War, Basil Hall and his family disposed of real property straddling today’s Lee Highway. It is still called “Halls Hill.”

Over time, the majority of residents who bought lots and built houses were African Americans. For decades the authorities and community-at-large simply ignored the community. Elements of basic infrastructure, such as paved streets and curbs and gutters, never reached the neighborhood. Neither was there firefighting capacity dedicated to protecting local lives and property.

A century ago, 14 men decided to do something about the situation, and the Halls Hill Volunteer Fire Department was born. The way would not be easy. While all firefighters donned bulky fire-resistant clothes and wielded heavy tools, the members of Engine Company 8 also bore the heavy burden of official policy and tradition known as Jim Crow. Slavery had ended decades earlier but suppression of African Americans had not. It appeared in many forms, one of which was the fact that companies of white firefighters would not respond to alarms triggered at Halls Hill.

Jerome Dale Smith, retired Battalion Chief of Arlington County Fire Department, tells of a situation encountered more than once when Engine Company 8 was first to arrive at a fire north of Lee Highway. A white homeowner would block the African Americans from entering the property, choosing to wait for a white fire company to arrive. When all they wanted was to serve, Smith said, “Iit was hard when nobody wanted you.”

Other manifestations of Jim Crow involved sleeping quarters and hand-me-down equipment. For years, Engine 8 was the only fire station with no place for those on duty to sleep until the alarm sounded. The fire company and the community solved the problem on their own: Funds were raised, adjacent property was obtained and the firefighters designed and invested sweat-labor to build their own sleeping quarters.

Again, when a white fire company procured new equipment, the old would be transferred to Engine 8. The men studied and disassembled and learned to repair what had come to hand. Brought to maximum potential, the refurbished equipment successfully entered service.

According to Marguarite Gooden, daughter of one of the first paid members of the fire company, the most blatant form of Jim Crow came from the dispatcher’s office. All the fire stations were on the same open line to receive assignments. It was routine to hear “Company X respond to fire at so-and-so address” followed by “The ‘N-word’ company at Halls Hill is to stand down.” Before such overt racism was erased from the fire service, the men of Engine Company 8 retained their sense of wry humor. The famous instance involved Rosslyn when it was an industrial area filled with lumber yards, metal fabricators and builders’ suppliers. On a cold, windy and miserable night, virtually every Arlington fire company was ordered to the scene for an unusually large fire, with one the exception: “The ‘N-word’ station at Halls Hill.” Warm and dry in their station house, Marguarite Gooden’s father, Hartman Reed, observed “Thank goodness for Jim Crow.”

Perhaps more important than fighting fires was the role of Station 8 in maintaining community spirit. Neighbors constantly came and went at the fire station. Gossip was exchanged and elements of truth were identified. Spats were resolved before friendships were fractured. A word from one of the men at Engine 8 carried weight and was trusted. In a wider form of community service, communications outside the neighborhood were facilitated when a pay telephone was installed in the firehouse. Calls were made and messages relayed at a time when many could not afford service or, even if affordable, would not be granted service by the telephone company.

Children of Halls Hill never were excluded from the Engine 8. Marguarite Gooden and Kitty Clark Stevenson both recall gatherings to watch television programs at Engine 8, and to be amazed at first seeing the new TV with color. On other occasions, the firefighters would set up a projector to show the youngsters moving pictures on the wall of the firehouse. Members of Engine company 8 were community role models. They had pledged to serve, and they kept their word. The firehouse was in perfect order and ready to respond at all times. The males, and in time the females, were admired as local heroes.

Through decades of daily example, residents of Hall Hill, and especially the young, saw people just like themselves who were responsible and self-sufficient and respected for adhering to high standards of personal character. Buildings and vehicles were important and valuable to fire service. However, the intangible qualities displayed by the men and women of Fire Station 8 for over a century have contributed something of greater importance that has been priceless for the residents of Halls Hill.