Sleep and Be Counted in Arlington
Votes

Sleep and Be Counted in Arlington 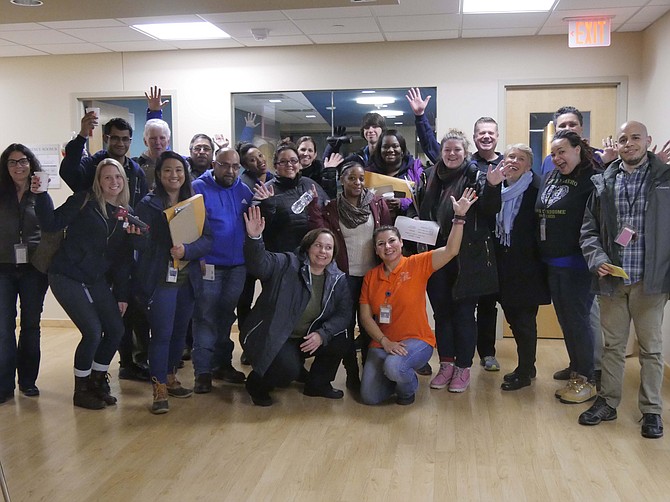 A group of volunteers pauses for a group photo before heading out to begin the 14th annual Arlington Point in Time (PIT) homeless count Wednesday, Jan. 23. This is part of a nationwide effort each year that takes place in January. Photo by Shirley Ruhe. 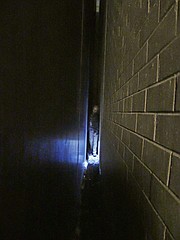 Arlington County Department of Human Services (DHS) outreach worker Miguel Carpio-Castanas spots an 18-inch gap between buildings in the middle of Shirlington. That is "a great place" for a homeless person to sleep. "People would walk by and never even see them." 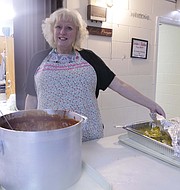 A church member serves chili to members of the Arlington community including homeless at Assembly of God Church on N. Pershing. She says they average about 50-75 a night including 10-12 homeless.

Team D chats with local people having dinner at Assembly of God church to check up on their status and current welfare and inform them about services available through Arlington County.

Team D heads for county van 2051 to begin their Point in Time (PIT) homeless count on Jan. 23. Keleigh Neyhart is an A-SPAN housing case manager. Miguel Carpio-Castanas is an outreach worker "who knows where to find them." Crystal Thomas works at the Department of Human Services (DHS) with adults with intellectual and developmental disabilities. "It's a calling. That's why."

They are part of a group of 65 volunteers who will man six teams between two shifts at the 14th Arlington PIT homeless count from 6-10 p.m. and from 10 p.m.-2 a.m. "It's warm tonight. They'll find more homeless during the second shift." The volunteers include DHS, A-SPAN board and staff members, Arlington Teen Network Board and the Urban Institute staff.

Their van heads for the Assembly of God church on N. Pershing along Route 50 to arrive before the dinner hour is over. A church member stands at a long table behind a big pot of chili that she has made with hamburger, three kinds of beans, tomato sauce and a little onion … with a touch of cinnamon. She says, "We average about 50-75 people a night.

"Some are homeless. We had 10-12 homeless tonight but the only one left is that woman over there. People come from the community, immigrants, people from Culpepper Garden who are in independent living, but without the meal plan." She said they also have a deaf ministry which meets at the church. Matt Martin hand gestures for a large bowl of chili. "His grandmother plays the organ here."

Carpio-Castanas looks around the room. He doesn't recognize anyone he knows there tonight. “You recognize the guy with long hair, right?"

"I think he used to be homeless but not anymore." Carpio-Castanas says, "The risk we run is figuring out who. I've made that mistake before." It can be embarrassing to ask a person and then find out they aren't homeless.

Neyhart adds, "I ask 'do you know anyone who is homeless,' and sometimes they say 'me.'" If the volunteers find a homeless person, the volunteers have a questionnaire they hope to fill out that helps identify the services the homeless person is currently receiving and additional help they might need.

Neyhart studies their list of sites for the evening. "It's close by; let's head to Pershing." The group of three parks alongside a neighborhood grocery and head for the alley in the back. Neyhart shines her high-powered flashlight behind a dumpster. No one here. "We're having a warm spell, and it's a little early to find someone here." An abandoned building around the corner that formerly provided a good sheltered spot has been torn down.

Next they head for the Shirlington Branch Library where they ask the librarian if she has seen any homeless people tonight. She says there are two or three regulars that she knows, but they aren't there now. "But we don't always know who they are. They just sit quietly." Neyhart says when the homeless are there, they probably stay until the library closes because it is a warm spot. Carpio-Castanas decided to take a walk around but doesn't spot anyone.

As they leave the library and head back to the parking garage, Carpio-Castanas spots an 18-inch gap between two large buildings. "See this? It is a great place. You could be right in the middle of Shirlington and no one would know you were there. They can be very inventive.“ He inches his way back about 30 feet, his pinprick of light pointing the way. The space opens up just enough for someone to sleep scrunched up. "Someone has been here. There are empty beer cans and soda cans and carry out wrappers. But not here now."

It's getting darker and starting to get colder. "I think we should check out the pavilion across from the Weenie Beanie," Neyhart says. As the van pulls into the parking lot, two men sit in the dark at a weathered picnic table playing checkers. Neither is currently homeless but one comments that he slept on the loading dock around the corner for a year when he didn't have funds. "Then it got rowdy and the police came all the time and we couldn't do it anymore." He pointed out that there are definitely some homeless sleeping under the bridge down a nearby path.

"While we're here, let's look around Jennie Dean Park." Carpio-Castanas heads for the picnic benches followed by Neyhart and Thomas. They spot two abandoned bicycles and flash the beam of light around the picnic shelter and head for the bleachers. Carpio-Castanas says, "There was a homeless man who used to sleep sitting up at a picnic bench with his head on a pillow on the top. I don't know how he did it."

Neyhart checks in with the other PIT teams and discovers they are not finding many homeless either — one by the Central Library and one by St. George's. "It's too nice out tonight, and they haven't settled in yet." She says some of the popular spots like the Rosslyn Metro won't be occupied until the Metro closes and there is no one to kick them out.

Carpio-Castanas says sometimes people call to report homeless sleeping in a parking structure around St. George’s. "We follow up by checking on them to see if they are willing to get services." He says neighbors complain that we give them sleeping bags. "But we're not police. We can't arrest them."

Carpio-Castanas adds, "We try to keep sleeping bags as a carrot. Maybe a homeless person won't talk to me for months, but then when they need something … we assist with whatever they need. Patience is the name of the game." But he continues, when you have their confidence, you better do what you say or you break their trust."

They walk further toward the loading dock. "That's a good spot," and around the corner where a number of dumpsters and nooks and crannies could offer haven. No one yet tonight but they'll keep looking. The results of this year's count will be available in several weeks.