Connect with Reality on the PIT Homeless Count in Arlington
Votes

Connect with Reality on the PIT Homeless Count in Arlington 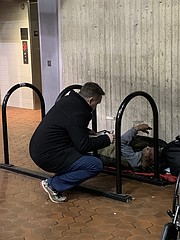 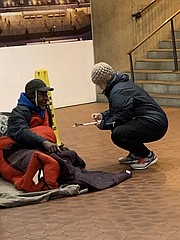 A-SPAN Nurse practitioner Kasia Shaw working with a homeless man to complete a survey for the County during the Point-in-Time Homeless Count. 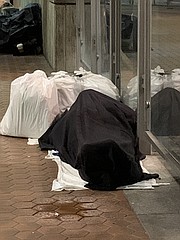 Homeless man bundled up in his sleeping bag at Rosslyn metro on Wednesday night.

The starting time had been moved from 5 p.m. the previous year in order to more accurately identify the homeless who generally bed down later and to eliminate double counting between shifts. The shift on Wednesday ended at 2 a.m.

Wednesday there was one person across the street from the gas station, one tucked in against 66, one at St. Charles Church and a woman sleeping in her car. One person accepted a taxi voucher at the airport to take him to the Homeless Services Center. Only discarded blankets and old food wrappers at the S. Glebe Road underpass. No one at McDonald’s at Crystal City or the soccer fields tonight.

Samuel Gatewood, A-SPAN homeless program case manager and co-leader of Team C says the director of the day program does a good job of locating the homeless people and gives the teams the areas to check. Most of the homeless were found at the airport or in the Rosslyn area. “It was cold but that was the challenge. A lot of people take for granted their functions.”

Gatewood says they found about eight homeless people at the airport in an area where passengers wait for flights. He explains there are a number of people who work at the airport who don’t have housing and they sleep in the chairs at the airport and then go back to work. “They can’t stretch out or anything.”

According to Gatewood they reached out to local police to alert them that the PIT count would include the airport. “The Airport police gave us two officers to escort us. The officers know many of the homeless through their community policing efforts. The police picked out non-aggressive people who weren’t panhandlers for us to survey.”

In addition to counting the numbers of homeless people, Gatewood explains the purpose of the PIT is to get individual surveys from willing participants, which allows the County to connect the homeless with available services. The survey asks about health concerns, housing needs, substance abuse, HIV, drugs of choice.

Anita Friedman, Director of Arlington County Department of Human Services, says after the PIT count, they engage with the homeless people to follow up on needed services. Friedman explains the survey asks, “personal questions to destitute people but they open up and answer the questions. They are grateful.”

Jasmine Hayes, Deputy Director of the United States Interagency Council on Homelessness who participated in the PIT wrote, “the PIT count is always a good experience for those of us not on the ground daily—it is a humbling experience to have someone who is experiencing literal homelessness give of their time and share a little bit about their story to a complete stranger.”

Gatewood adds that some of the homeless can be suspicious “but the police did a wonderful job of bridging the gap. They were kind and professional and treated the homeless as human beings.”

Also as an incentive to answer the questions the teams give out McDonald's or Dunkin' Donuts gift cards. In the case of his team, one of the A-SPAN Board members had brought along warm socks to hand out. Friedman says her team also brought along bagged lunches. Friedman said they were at the Rosslyn Metro at 11:30 p.m. when the Metro had closed for the day.

“A number of homeless had already gone to sleep, so we didn’t bother them, and others were bedding down. Some did not want to be approached.” She adds that a lot of these folks were known to us; they had been there for a while. We had brought them food and blankets in the past, and we were lucky to have a nurse traveling with us.”

Friedman says, “there are those who are mentally ill and have been there for a while who don’t want to come in. There is a 73-year-old man who has been in one location behind a townhouse for 15 years.” She says Arlington is successful at getting those homeless housed who are able to overcome their obstacles.

County Board Member Matt de Ferranti says, “You can understand there were just some who didn’t want to be connected to help. They had been through so much, they just didn’t want to work within the confines of what it takes.”

The PIT teams included 34 staff and volunteers including Arlington County Government as well as A-SPAN, the U.S. Interagency Council on Homelessness, Arlington Police Department, Metropolitan Washington Airport Authority and community members. The partners who counted the individuals and families in shelters included A-SPAN, Doorways, Bridges to Independence and Volunteers of America Chesapeake & Carolinas.

De Ferranti, a first time PIT volunteer, explained that A-SPAN made it easier to take the survey by acting as the facilitator with the homeless. He says A-SPAN explained why we were there and what would happen. “I did 4-5 interviews. I needed help with my Spanish with one person.

“But I had a moment that came in a series of questions about income and employment.” De Ferranti says there were a fair number of questions to work through and you wanted to be respectful. “I asked the homeless man if he had employment.” The answer was no.

But there were a series of detailed questions so de Ferranti continued with the next question about part time or temporary employment. “He said kindly but clearly ‘I’m homeless, man.’ It was just a fact.” De Ferranti adds, “This can happen to anyone. To be fairer, better, we need to work to do more.”

Friedman was one of the people to work on the first PIT about 12 years ago. She does the PIT every year to connect herself with the reality in Arlington. “It is a wake up call on a hidden population.” She says many people have a moral focus but the homeless have become homeless because they have mental issues, adverse life experiences or intergenerational baggage.

”What we can do to lift them up is what we should do.” She adds, “The PIT shows a side of Arlington that most residents don’t even know exists. If everyone in Arlington could do the PIT count, we would be a different community.