‘Better Visuals of Pedestrians, Other Drivers’ on Route 29
Votes

‘Better Visuals of Pedestrians, Other Drivers’ on Route 29 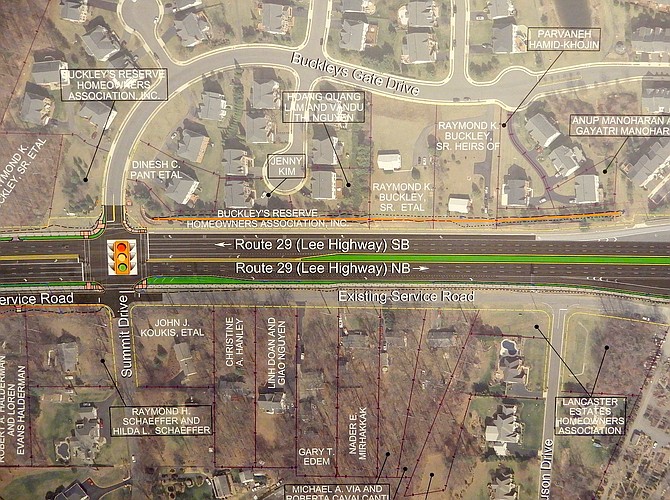 Route 29 will be widened from four to six lanes between Buckley’s Gate Drive and Union Mill Road.

Crystal Springs resident Eric Zidenberg hopes the project “will ease congestion so traffic won’t back up at my traffic light at Route 29 and Buckleys Gate Drive.”

Effie Tzaferis and her dad, Kosta Tzaferis, discuss with Spencer Whitehead of Rinker Design Associates how a huge oak tree on their property would be affected.

The goal is to reduce congestion, while improving safety, operations and access. The project will also add and improve 10-foot-wide, shared-use paths along both sides of Route 29 to provide better bicycle and pedestrian access to the trails at the Fairfax County Parkway/West Ox Road Interchange. There’ll also be crosswalk improvements at major intersections, with modified signals to accommodate them.

TO PRESENT the preliminary design to local residents and obtain their feedback about it, VDOT held a design public hearing, June 10, at VDOT’s Northern Virginia Headquarters in Fairfax. Some 80 people attended, saw maps of the project area and heard details about it from professional engineers.

Design Consultant John Giometti, with Rinker Design Associates, said Route 29 currently has 33,000 vehicle trips/day; but by 2043, that number is expected to increase to 44,000. That’s another reason why the widening is needed.

“At Union Mill, there’ll be a new lane configuration to allow three lanes through that intersection,” he said. “And a safety improvement – a right-turn slip at Union Mill – will give drivers better visuals of pedestrians and other drivers. The traffic signal will stay.”

At the Clifton/Stringfellow roads intersection, said Giometti, “We’d pull the access to the 7-Eleven further back from the road for safety. The traffic signal will remain, and there’ll be dual, left turns on Route 29, with a right-turn slip design and improved, left-turn capacity.”

He also noted that, at Hampton Forest Way and Meadow Estates Drive, there’ll be a new, box culvert at Willowmeade Drive and a safer exit from Route 29, with a right-in, right-out design and a deceleration taper on approach. And at Buckleys Gate Drive, the shared-use path at Summit Drive will connect to the existing one at the Fairfax County Parkway.

“This project has federal funds, so we conducted a NEPA [National Environmental Policy Act] environmental analysis,” said Giometti. “The impacts are expected to be minimal, and we’ll keep the site moist to prevent dust.”

LJ Muchenje, VDOT environmental and noise-abatement coordinator, discussed possible noise mitigation. “All noise-sensitive sites were studied – homes, parks, recreational areas, etc.,” he said. “If the noise level is 66 decibels or higher, we say the site is noise-impacted and is eligible for a noise wall.”

But, he added, “We also look at feasibility and other challenges to building it.” These challenges include safety, wall height, topography, drainage and utilities. Furthermore, 50 percent of the affected homeowners must want a noise wall constructed.

Beacher then discussed the right-of-way process, as well as the project cost and funding. He said each property impact is unique, and further design details are needed to determine the full, right-of-way impacts.

“We’re estimating two-and-a-half years for construction,” said Beacher. “The estimated cost has gone up by about $19 million, due to market conditions, increased cost of materials and the high demand for labor because of all the mega projects here in Northern Virginia. So we’re still looking at ways to fund the deficit and haven’t decided how, yet.”

DURING THE QUESTION AND ANSWER period, Sully District Transportation Commissioner Jeff Parnes asked if this project will take “the right-of-way for the grade-separated interchanges that’ll be needed 30 years hence.” Beacher said it won’t.

“At the bridge over Willow Springs Branch, there’s an extreme dip, and it’s hard to see cars there,” said Centreville resident Claudette Ward. “Will there be any effort to make this safer?”

Beacher replied, “We are looking to correct some of the grade issues.”

And, added Giometti, “We’ll correct all sight-distance issues all along the corridor.”

A Hampton Forest/Hampton Chase resident asked if any homes would be condemned. Giometti answered, “There’s one, vacant home where a stormwater-management facility will be going in, so that home will be a total take.”

A woman who lives on Regal Crest Drive asked when the noise-wall voting would be done, “Once the design phase is done, in mid-2020,” replied Muchenje.

A man wondered if two lanes of traffic on Route 29 would be maintained during construction, and VDOT Project Development engineer Nick Roper said they would. Furthermore, he said, “Before construction starts, we’ll have a ‘Pardon Our Dust’ meeting to give you the construction details.”

Beacher said it’ll take an estimated 18 months to move the utilities. “And we’ll also correct the [current] drainage and flooding issues,” he said. For example, said Giometti, “On northbound Route 29, just past Clifton Road, the 24-inch culvert [pipe] there now will be replaced with two, 24-inch culverts.”

Resident Ireldy Fuentes inquired about Route 29’s intersection at Hayden Village. “Will there be a left turn there or a U-turn at Clifton Road?” she asked. “No more left turns will be added,” answered Giometti. “But we’ll look into a U-turn, if possible.”

Right-of-way acquisition – including meetings with individual property owners – is expected to begin in early 2020. Construction is anticipated to start in late 2022. After the meeting, Supervisor Pat Herrity (R-Springfield) said, “This is a good project – it fixes a lot of things.”