Both customers and vendors enjoy communication and familiarity. 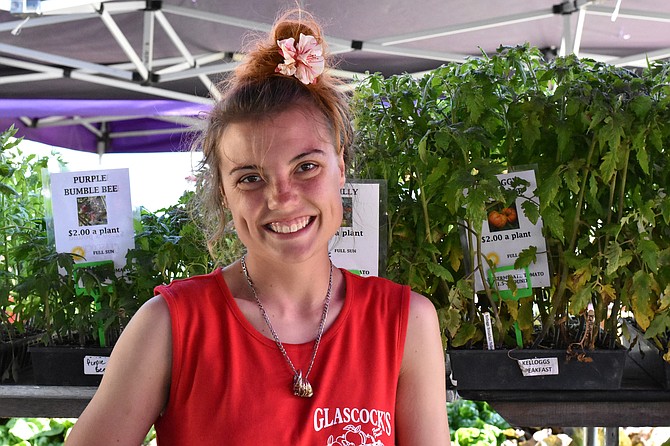 Angel Miller, an employee of Glascock’s Produce, in front of their tomato plants. Photo by Abby Sacks/The Connection 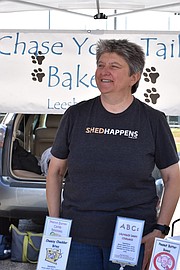 Deb Matthews stands behind the Chase Your Tail booth, talking to a customer.

Julia O’Donnell holds the flowers and bags of groceries she purchased at the market.

In the Burke Farmers Market, people old and young, in groups and solo, explore the booths of more than thirty vendors to find fruits and vegetables, meats and fish, vegan and gluten-free foods and even dog treats.

Many vendors have held a booth at the market for many years, some even for more than two decades. Still, a handful of sellers are new to the space. Whether veteran or new, repeat customers have formed relationships with the vendors by visiting as often as every week.

“We have a large rapport with people we’re familiar with,” said Jerrica Golden of Glascock’s Produce. Glascock’s Produce has built a large customer base in the 26 years of being at the farmers market. A few weeks ago, when the company truck broke down, and they were not able to set up shop in the market, their customers noticed. Golden said she still gets asked about their absence that week.

This sentiment of customer loyalty holds true with the newer vendors as well. Though Chase Your Tail Bakery, a bakery that makes treats exclusively for dogs and cats, has only been present at the market for two years, they see many of the same people who visit regularly. “As soon as they approach the table, I know what they want,” said Deb Matthews about customers she sees often.

Joyce Burnett of Loice’s Mae’s Kitchen has also been at the Burke market for two years. She said she “enjoys very much so” selling her vegetable and fruit smoothies here because of the friendly and welcoming community the space provides. She also said she feels a sense of “camaraderie with customers.”

The customers who frequent the Burke Farmers Market also enjoy the experience because of the neighborly environment. David Smith, the market manager, called it a “community experience” where “people see each other.”

Another way the farmers market welcomes people is by offering a variety of products that cater to many different dietary restrictions and preferences. Loice Mae’s Kitchen offers diabetic-friendly versions of all the flavors of their smoothies and some in keto-friendly versions, too. Julia O’Donnell, who walked to the market with her daughter and granddaughter, appreciated the diversity of choices available. “I love it,” she said. “There’s such a variety of things.” Even Chase Your Tail Bakery has a special creation made for gluten-free pets.

The inclusive and positive nature of the Burke Farmers Market draws in vendors and customers alike. Smith especially appreciates the community found at the market. A place people gather together in such a way is “hard to find in today’s world,” he said.

The Burke Farmers Market is open Saturdays from 8 a.m. to noon between April 13 and Dec. 21.