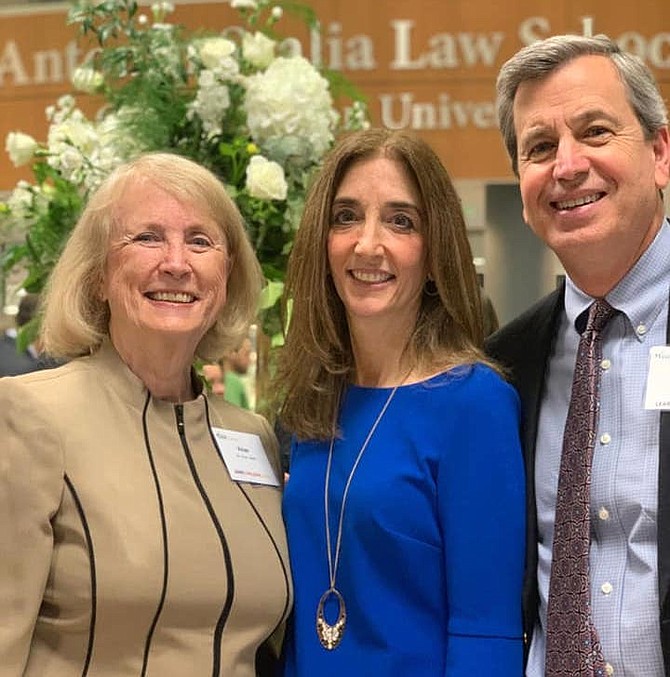 On Wednesday, May 22, Del. Eileen Filler-Corn (D-41) was honored by George Mason University’s Antonin Scalia Law School with the Dean’s Medal for Legislative Excellence at their 22nd Annual Judicial and Legislative Reception. Since 1998, the Judicial and Legislative Reception (JLR), seeks to honor and recognize those who serve the people of Northern Virginia, whether as a legislator, judge or attorney. Many GMU alumni, attorneys, judges as well as a few elected officials attended the evening event.

In her remarks Filler-Corn recounted the impact of a colleague of the school’s namesake had on her own career, saying, “As I sat down to write my remarks for this award, I reflected quite a bit on women who came before me when it came to the study of law. One that immediately came to mind was a longtime friend, colleague and “opera buddy” of the namesake of this law school. Of course, I am talking about Justice Ruth Bader Ginsburg.” Filler-Corn went on to quote the Justice, saying, “Ginsburg once said, ‘Fight for the things you care about, but do it in a way that will lead others to join you.’ Though Ginsburg only said that just a few years ago, the way she has lived that truth is reflected through her entire career. Her career inspired countless young women and men who went into law or government after her—myself included.”

Filler-Corn, who holds a JD herself from nearby American University, concluded her speech by remarking how it is this same quote that influences her approach to governing. “It is coming together and finding common ground that truly allows us to get things done. I believe we can solve so many problems in our world if we focus on where we can agree before we focus on where we disagree.”