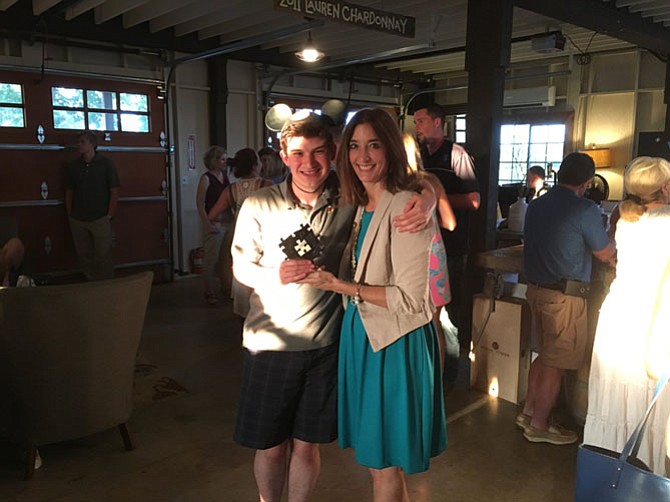 On Tuesday, Aug. 16, the Autism Society of Northern Virginia (ASNV) honored Del. Eileen Filler-Corn (D-41) with the Community Builder of the Year Award during ASNV’s Annual Wine and Dine for Autism event. This award recognizes those who have had a significant positive impact on the autism community.

Delegate Filler-Corn addressing the crowd upon accepting her award.

ASNV chose to honor Filler-Corn for her work in making the Achieving a Better Life Experience (ABLE) Act a reality in the Commonwealth. Her 2015 bill created “ABLE” Accounts, similar to the 529 college savings accounts, which would allow for those with disabilities as well as their families to save money for various needs including housing, education and medical care. Virginia was the first state to pass such legislation since the passage of the federal act. This past session, Del. Filler-Corn introduced and passed legislation that would ensure these same accounts would be free of means testing. In addition, she also worked with the Governor this year to ensure that the biennial budget included a $2000 income tax deduction for contributions to the ABLE savings accounts starting in Taxable Year 2016.

Addressing the crowd, Filler-Corn spoke of how the ABLE Act came to be, adding with pride that the idea came from constituents in her district. “Stephen Beck and his wife Catherine are parents of a child with Down syndrome and they worried for years about how they would care for Natalie when she was older and they were unable to provide the day to day support they were once able to provide. While sitting at their kitchen table they developed the idea for the [federal] ABLE Act,” said Filler-Corn “After years of advocating and working for its passage at the federal and state level, Catherine and Stephen’s hard work as well as the work of so many others paid off. While unfortunately Stephen is no longer with us, his work with Catherine will live on in these ABLE accounts, which will help countless Virginians for years to come.”

“Overall, it was an incredible evening with fabulous people all committed to make a difference. There was an impressive speech by Connor Cummings, the namesake of Connor's Law, who I had the opportunity to meet in Richmond last year as he advocated in support of legislation. Amazing musical entertainment as well by several incredibly talented individuals including my constituent Jake Sizemore, from Burke, who teaches us that we should look for the talent in everybody,” she said.