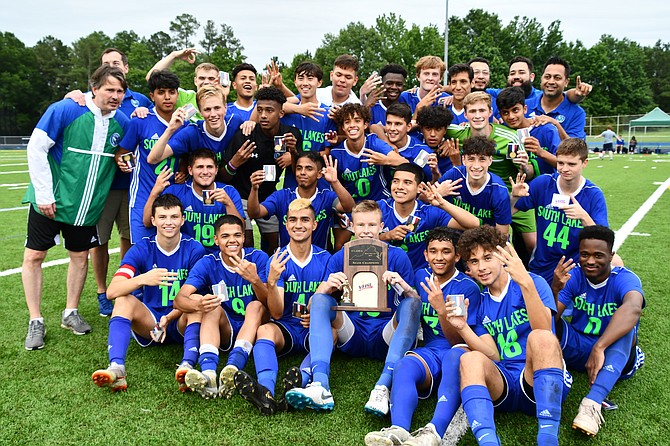 The South Lakes' team celebrates their victory at the VHSL 6A State Championships on June 8. Photo courtesy of Steve Stassinos

A throw-in from Seahawks' #15 Michael Bush sets up a well-placed header by teammate #44 Merrick Edgerton. The ball swishes into the goal, clinching victory for the Seahawks.

Brennan Kenny, a player on the opposing team, Madison High School, stated, "It was a great experience for me … knowing that our team grew as a family made the experience even better. Reflecting on how far we have come—last year we lost in the second round of Regionals and this year finishing the season second in the state is unbelievable."

Saturday, June 8, marked the final game of the VHSL State Championships in Richmond. The finals pitted rivals Madison and South Lakes high schools against each other. Ultimately, the South Lakes Seahawks soared to victory, edging out the Madison Warhawks by one goal.

Advancing to the championship game is no small feat. Madison Soccer Coach, Randy Wood reflected, "This team has been hard working and driven. They were dedicated to success and determined to finish strong. I am really proud of these guys."

Coaches saw determination throughout the game. The first half ended in a stalemate, neither team able to weave past the defenses of the opposing team to score a goal. It was only in the second half that South Lakes' sophomore Merrick Edgerton, #44 on the field, found an opening and headed a well-aimed throw-in by #15 Michael Bush squarely into the net.

Merrick scored the only goal of the game, leading the Seahawks to victory.