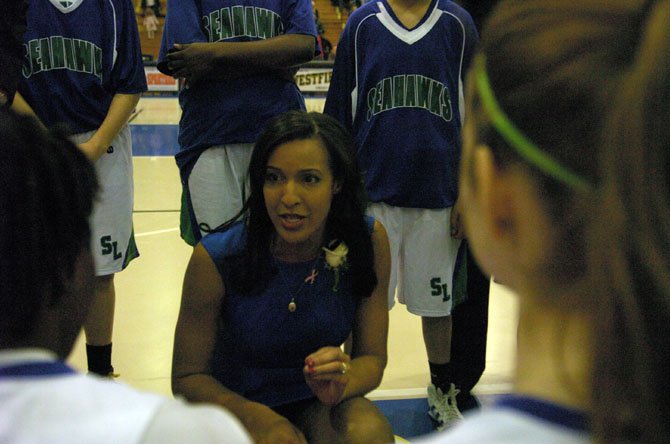 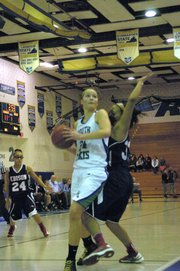 Fairfax — The South Lakes girls’ basketball team experienced the high of reaching 20 victories, the low of losing in the district tournament semifinals and the stressful bliss of winning three regional contests by a combined five points. And while the Seahawks slipped in blowing a 17-point lead in the region final, the good news for South Lakes is there is still a chance to end the 2012-13 season on a high note.

South Lakes lost to Edison 60-52 on Saturday, Feb. 23, in the Northern Region tournament championship game at Robinson Secondary School. The Seahawks led 20-5 at the end of the first quarter and by as many as 17 points in the first half, but the Eagles chipped away at the deficit and took over the game in the fourth quarter.

The loss did not end South Lakes’ season, however, as the Seahawks’ victory against Oakton in the semifinals secured them a state berth. South Lakes will face Northwest Region champion Stonewall Jackson in the first round of the AAA VHSL state tournament at 6:45 p.m. on Friday, March 1, at Robinson.

South Lakes earned victory No. 20 when it beat Marshall in the opening round of the Liberty District tournament on Feb. 12. But two days later, the Seahawks, who entered the tournament as the No. 1 seed, lost to defending district champion Madison, 55-52.

“We didn’t make it to the championship in our district, which is a very big disappointment. Advancing all the way to the regional championship shows how mentally tough we are and how we were able to come out of a loss from the district tournament strong and ready to keep competing.”

South Lakes recovered from the defeat, winning three regional tournament games in four days by a combined five points. The Seahawks beat Chantilly 42-40 in the opening round on Feb. 18. The following evening, South Lakes knocked off National District champion Mount Vernon 46-45 on a buzzer-beater from guard Caitlin Jensen. On Feb. 21, the Seahawks beat defending state champion Oakton 48-46 in the semifinals. 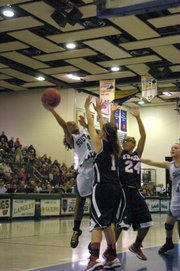 South Lakes junior Sasha Sprei shoots against a pair of Edison defenders in the Northern Region championship game on Feb. 2.

“First of all, I’m really proud of my team for making it this far,” South Lakes senior Gabrielle Schultz said after losing to Edison in the region final. “We didn’t make it to the championship in our district, which is a very big disappointment. Advancing all the way to the regional championship shows how mentally tough we are and how we were able to come out of a loss from the district tournament strong and ready to keep competing.”

South Lakes center Abigail Rendle finished with 14 points, 12 rebounds and nine blocks in the region final. She had eight points, six boards and five blocks at the half, but had also been whistled for three fouls. She picked up her fourth foul with 2:28 remaining in the fourth quarter and Edison leading 53-50.

While Rendle was a shot-blocking force for South Lakes, Edison freshman guard Jada Graves continued driving to the rim. She finished with 23 points, including 22 in the second half.

“I’m not scared of anybody,” the 5-foot-9 Graves said about going against the 6-foot-2 Rendle. “I’m going to take it and try to get her in foul trouble. If she blocks it, [I’ll] go again.”

Graves was named tournament MVP. Rendle and Schultz were named to the all-tournament team.

“I’m a senior,” Schultz said, “and I tried to play so hard so I could leave my mark.”

Despite the loss, South Lakes still has a chance to leave its mark on the 2012-13 season.