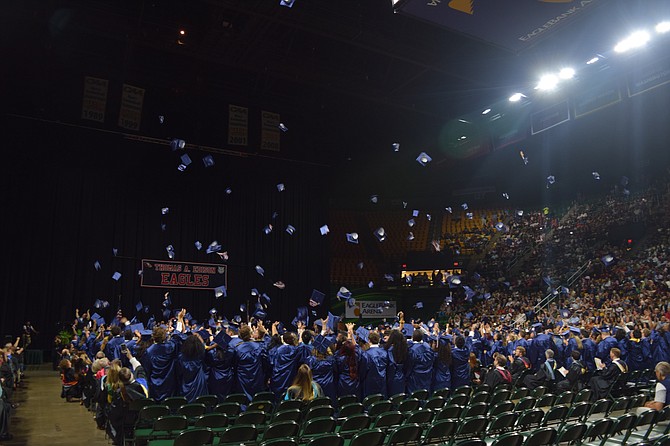 After they all walked across the stage, Edison graduates throw their caps in the air as they cheered and were officially declared graduates. Photo by Zachary Schonfeld/The Connection

Jason Cerda, a three-time Billboard Top 20 Artist, told Edison graduates to not be scared to fail and never stop dreaming.

The Edison Commencement Choir, Symphonic Band and Orchestra joined together to perform “Slipping Through My Fingers” during the ceremony as a tribute to the graduates.

The JROTC Color Guard presented the colors for a performance of the Star Spangled Banner to start the ceremony.

Reem Ali, an honor graduate, urged the seniors to take “leaps of faith” and overcome obstacles to succeed.

Before the approximately 449 students walked across the stage, speakers celebrated the Thomas A. Edison High School’s diversity and urged graduates to achieve their dreams by making a difference in the world and taking risks.

Jason Cerda, a three-time Billboard Top 20 artist and a 2005 graduate of the school, gave the commencement address. He told the graduates that their biggest dreams may sound “crazy,” but they can be achieved through hard work and perseverance.

“It should scare you and make you sleep at night trying to figure out how on Earth you want to pull this off, because if it didn't, then you're not dreaming big enough,” he said.

Cerda added that it will be easy for the graduates to make excuses, but that only leads to regret and proves everyone else’s doubts.

“I've never had a single doubt in my mind that this is what I was supposed to do for the rest of my life,” Cerda said. “And you should be thinking the same thing, too: Why not you?”

He said the graduates will need to make sacrifices and fail along the way, but these failures will lead to eventual success.

“We're scared of failing,” Cerda told the graduates. “Let me tell you something: if you don't fail in life, you will never know exactly what it is you want out of it. Every little failure you have will contribute to your journey and you will grow so much from it.”

Principal Pamela Ellison Brumfield also addressed the crowd, and began by thanking faculty, staff and the seniors’ families for their role in supporting the graduates. Graduation marks a celebration, farewell and beginning for every graduate, she said.

“It's a time that you look forward – you set new goals – and realize that the future is where you're going to spend most of your lives,” Brumfield said. “Dream big, don't limit yourself, set goals and do the work.”

She said the graduates have earned millions of dollars in scholarships and told them to remember to always have “eagle pride,” in reference to the school’s mascot.

Reem Ali, an honor graduate who spoke at the ceremony, said the graduates have overcome mental health struggles and structural expectations with a “continual drive to success.”

She urged the graduates to take “leaps of faith” and become voices of change to make the world a better place.

“To be honest, we're all terrified,” Ali said. “We've always been told not to fear the unknown. But if there's one thing I've learned – because it definitely wasn't Euler's formula – it's that fear is okay.”