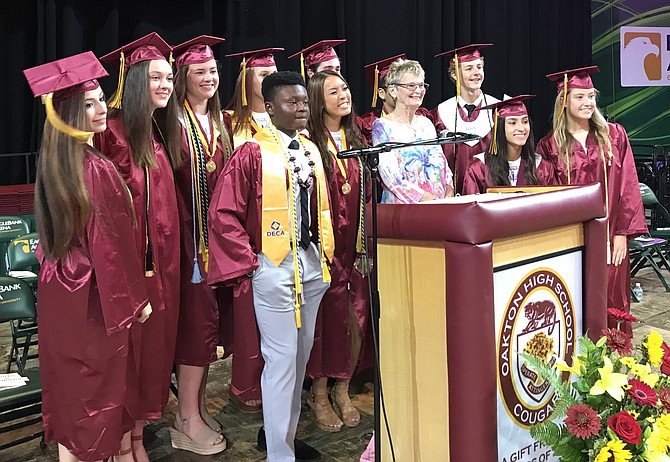 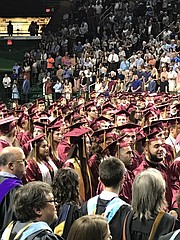 Savanna Lee Forrest and Hannah Noel Roti get a little help with their caps before the start of the Oakton High School's Fifty-first Commencement Exercises. 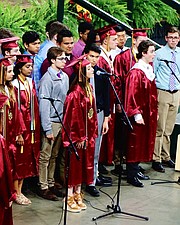 Rachel and Liam Bloom, 2019 graduate candidates and members of the Oakton High School Singers, perform solos during the Senior Tribute under the direction of Tiffany Powell at the school's Fifty-first Commencement Exercises on June 6. Liam Bloom drummed the Cajun during the performance. Graduate candidate Julia Ferri also performed a solo during the tribute. 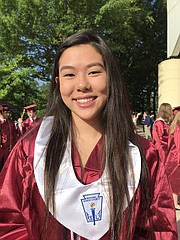 Michelle Liang of Fairfax, 17, heading to Penn State University: "My advice is from experience: spend more time with friends and family." 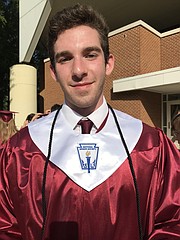 Joshua Myers of Herndon, 18, heading to Gettysburg College: "To my parents, I'd like to thank you for getting me through this chapter of my life and supporting me." 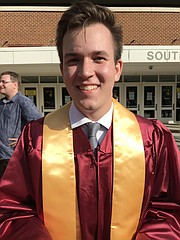 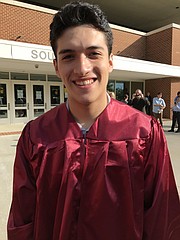 Abel Berrocal, heading to Northern Virginia Community College: "Advice to freshmen: use deodorant; you smell a lot at 14." 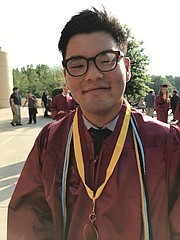 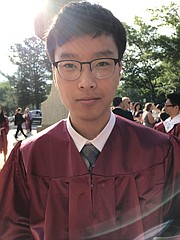 Seungbin Lee, 18, heading to Virginia Commonwealth University: "The greatest experience that made me think, was learning about ‘The Allegory of the Cave’." 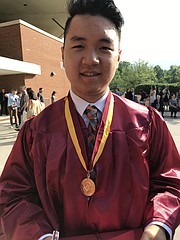 Hyeonseung "Thomas" Bae of Oakton, 19, heading to University of Illinois: "The funniest thing was I made it through high school. It was really hard."

For the Oakton High School community, June 6 proved to be a special day. Surrounded by family, friends, teachers, administrators and distinguished guests at the school's Fifty-first Commencement Exercises, a reported 670 young adults sat in their burgundy caps and gowns at George Mason University EagleBank Arena ready to begin their next great adventure.

Before the Commencement Exercises started though, graduate candidate Gabriella Shapo – chosen to present the Student Address during the ceremony – shared what she considered the most important lesson she learned at Oakton High School and the theme of her Address: “Individual responsibility for the collective good,” Shapo said.

Before remarks by guest speaker, Sandy Reynolds, graduate candidate David Park stepped to the podium and recognized two faculty members retiring at the end of the school year, David Foley and Fred Priester. "We appreciate you and wish you all the best," he said.

Next, Devin Martin announced that the Class of 2019 began a new tradition at Oakton High School, the Class Teacher Award. Martin explained that graduating class nominated one teacher who it believed made the most significant impact on them over the last four years. Before announcing the name, Martin read some of the many comments students submitted: "I have never met a teacher who wants to teach and see her students succeed as much as she does. …She’s a teacher you can come to for anything, and she will be completely honest. …Simply put, she's the best.” The winner of the Class of 2019 Teacher Award went to Kelly Butterfield.

PRINCIPAL Jamie S. Lane announced the recipient of the highest and most prestigious award bestowed upon a graduating senior, the 2019 Faculty Award given to a student who selflessly and generously contributed to the Oakton High School community throughout his or her tenure. Lane said, "She has grown from a shy, nervous freshman into an independent, thoughtful graduate... positive and uplifting to her classmates and teammates and pushes herself and others to achieve that which seems beyond reach. I am honored to present the 2019 Faculty Award to Carolyn Qu."

Kelsey Brooks introduced guest speaker, Sandy Reynolds, a longtime member of the Fairfax County Public Schools and Oakton High School community who, Brooks described, worked "tirelessly through her career to create and grow a culture of equality.” In her remarks, Reynolds said, "My ultimate goal was to make Oakton High School the best in the county with the happiest and most productive students. Happy kids; happy classroom."

Graduate candidate Gabriella Shapo provided the student address. In it, she spoke about the overwhelming pride the Class of 2019 will have 20 years from now, when "we see the people from our high school, leaving a real, and lasting legacy." Shapo cautioned her classmates not to focus their energy on "making an impact, let's consider how we're making (it)." Shapo told the story of a man who tried to change the world and he couldn't, so he decided to change his country, then his community and finally his family, failing miserably at all. Instead, Shapo told the Class of 2019 that the man changed himself. He dedicated much of his time to personal development, to be kinder, to give for the sake of giving, to learn about the world around him and to laugh. She said that the man's family saw the difference and modeled his actions, as did individuals in the community, his country and the world. "Our collective ripple effect of friends, family, and Class of 2019 is nearly infinite. With that kind of power, it'll take a lot less than 20 years to see how we changed the world,” Shapo said.

Oakton High School Singers presented the Senior Tribute to the graduating class and all who supported them on their journey. Tiffany Powell directed the singers, with solos by Julia Ferri, Rachel Bloom, and Liam Bloom, who also drummed the Cajun.

Afterward, Jennifer Hogan, Director of Student Services, thanked all for joining to honor the Oakton High School Class of 2019 and addressed Principal Lane for the words all awaited. "I certify that the members of the Senior Class of 2019 have met the requirements established by the Commonwealth of Virginia and Fairfax County School Board. I declare them eligible for graduation from Oakton High School."

The eighth paragraph of this article was corrected, and a photo was added (fourth from top), on June 10, 2019.