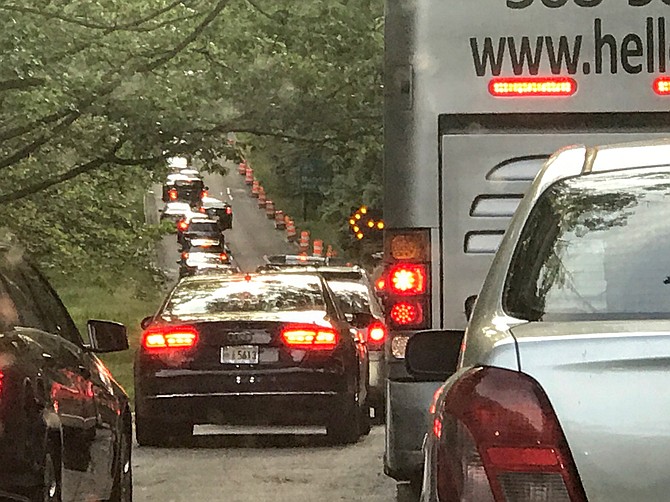 Traffic backs up on the George Washington Parkway northbound to merge around a sinkhole on May 21. When the NPS initially stabilized the sinkhole in mid-May, it was 10 feet deep, 30 feet long and 20 feet wide. Construction will continue through most of the summer. Photo by Mary Kimm.

The National Park Service (NPS) is preparing to begin construction on a long-term repair of the sinkhole near Dead Run on the George Washington Memorial Parkway. Following extensive assessments of the area and of drainage infrastructure that is deep underground, engineers have determined that the NPS needs to replace a 60-year-old brick drainage structure and rehabilitate the pipes leading to that structure.

“We are working with the Federal Highway Administration to fully address the sinkhole and reopen both northbound lanes of the George Washington Memorial Parkway,” Superintendent Charles Cuvelier said. “At this point we are finalizing construction plans for a long-term fix. Once construction on the long-term fix begins, it is anticipated to take approximately 10 weeks.”

Since the sinkhole opened in mid-May, engineers and work crews have:

When the NPS initially stabilized the sinkhole in mid-May, it was 10 feet deep, 30 feet long and 20 feet wide. The temporary stabilization is allowing vehicles to safely travel in the left lane. Drivers in the area should expect to see active construction and workers near the road.

In order to protect workers and allow drivers time to react to the changed lane configuration in the area, the NPS has lowered the speed limit to 40 miles per hour. Drivers need to slow down for their safety and for the safety of construction personnel.