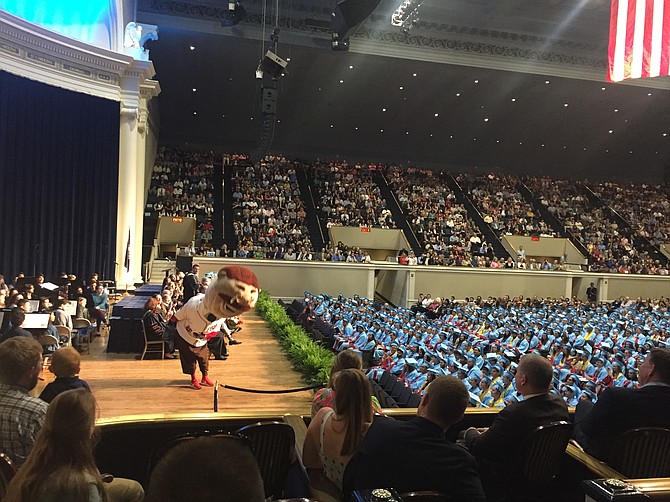 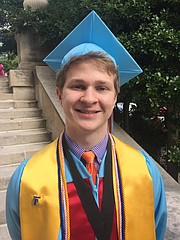 Will Hemmingson will be going to JMU to study Chemistry. “Anything that keeps me in the lab I’d like to keep doing, maybe something in toxicology or pharmacology, something along those lines.” 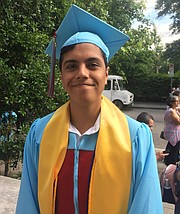 Saul Silva Suarez will be taking a gap year, but plans to attend college after that. “I see myself in 10 years hopefully on a stage making people laugh.”

This past Wednesday, June 12, George C. Marshall High School graduated 559 students in DAR Constitution Hall. Graduating class seniors wore their school’s colors on their robes to make the floor an ocean of blue and red with countless glints of golden honors stoles representing students who belong to the National Honors Society.

The commencement address was given by James MacIndoe, who said, “It’s absolutely surreal to see so many people I love in one room.” In his speech MacIndoe opened up about how life can be complicated and chaotic, which is a feeling some in any graduating class may feel. MacIndoe recalls the unfortunate passing of his son Finn and in a heartfelt moment all of Constitution Hall was silent out of respect. MacIndoe expresses how he was “humbled by the love of the Marshall community” in the wake of his personal tragedy.

To give direction in the complicated world he says the 2019 graduating class will be entering MacIndoe has five pieces of advice: be flexible, be kind to yourself, develop an emotional support system, break down and rebuild the metrics you use to judge yourself, and adulthood is an adventure in doubt. “Your first job is to love and be loved in this world,” said MacIndoe.

The next speaker was Andrew Litterst, an environmental science teacher, with the program’s faculty address. Litterst took things to a lighter side by humbling himself for being chosen to speak on the school’s behalf and also for his appreciation of his students. Saying he could not complete the speech on his own Litterst brought out the Teddy Roosevelt mascot from the Washington Nationals Presidents Race. By using “Teddy’s” experience with the Presidents Races over the years Litterst compiled a list of advice for the graduating class of 2019. As Litterst went on with his speech Teddy danced and made gestures that went along with what was being said.

First, if at first you don’t succeed, try, try again. This is in reference to Teddy’s many losses over the years of the races. However, just like Litterst hopes his students will, Teddy managed to finally win a race after not winning any races beginning in 2006 all the way to 2012. The second piece of advice Littersts offers is to not be afraid to ask for help, just as the presidents have won races through many different varieties of strategy.

Third, “No matter what happens in the race, have fun with it” said Litterst. Just as each mascot president in the race always seems to enjoy themselves so should the graduating class. Next, Litterst says, “you will do great things, it’s okay to celebrate,” to which the mascot Teddy performed a celebratory dance move to the crowd. Finally, Litterst leaves us with his last piece of advice, a quote, “The only man who never makes mistakes is the man who never does anything,” Teddy Roosevelt.